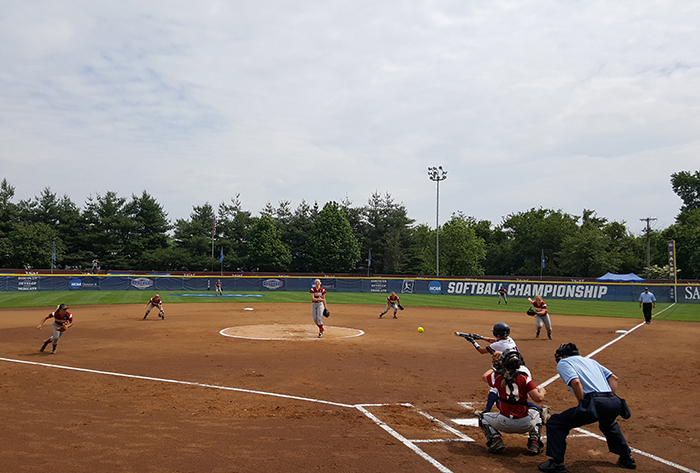 SALEM, Va. — Texas-Tyler finished early and Messiah came up big late to remain unbeaten and in the winner’s bracket on day two of the NCAA Division III Finals on Friday at the James I. Moyer Sports Complex.

Cheyenne Thompson (homer) and Kristin Lopez (double) both drove in three runs, while NFCA All-American Kelsie Batten and Alaina Kissinger combined on a five-hitter as the (46-4) Patriots used a pair of six-run innings to improve to 2-0 at the double-elimination event.

Fellow All-American Raven Rodriguez doubled and drove in two runs with a pair of hits for last year’s NCAA runner-up and the lone returning team to Salem.

Amber Bingaman had an one-out single in the top of the eighth inning, as the (46-4) Falcons scored twice in the frame to break a 1-1 tie and win its second-straight game in Salem.

Brooke Pompeo singled to right with two outs in the eighth for Messiah’s final run and Madelyn Yannetti teamed with Courtney Allen on a five-hitter.

Jasmin Joseph had two hits in the loss for the (34-13) Engineers.

All-America pitcher Lindsey Thayer (seven strikeouts) retired 13 straight Tommie batters after a pair of hits in the second in a two-hit shutout as the (39-11) Cardinals eliminated St. Thomas.

Sarah Kubik hit a solo homer in the sixth and Ashley Prince singled home an insurance run in the top of the seventh for St. John Fisher.

Dana Connelly and Micaela Trainor had the (43-8) Tommies’ two hits.

In the other elimination game, All-American Shilah Snead had two hits, including a homer, and scored twice as the Profs stayed alive.

Sam Gudat, Laura Bonds and Katie Caulfield all had three hits for the (35-13) Titans, who only allowed five hits between the pitching duo of Mackenzie Marquis and Jenna Noland in the season-ending loss.

Impending weather forced tournament officials to alter Saturday’s schedule, with MIT facing St. John Fisher in an elimination game at 11 a.m. and Emory’s game with Rowan moved to 1:30 p.m. The MIT-Fisher winner will now play Texas-Tyler at 4 p.m. Saturday, while the Emory-Rowan victor will oppose Messiah at 6:30 p.m.

For the NCAA’s video recap of all the action, click HERE