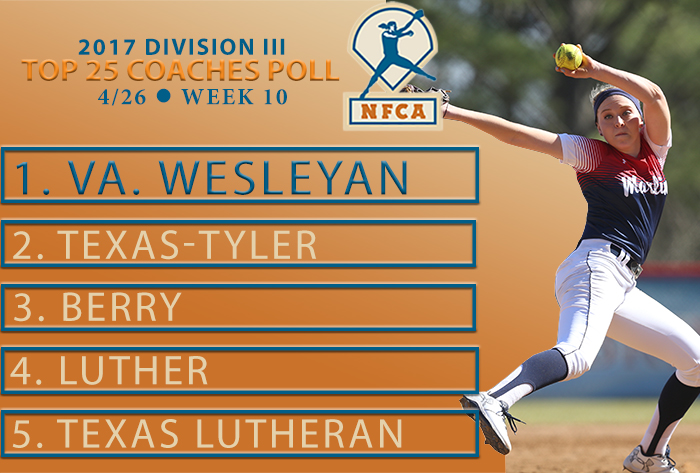 LOUISVILLE, Ky. — Virginia Wesleyan wrapped up its regular season with a home sweep of Bridgewater on Saturday to remain the unanimous No. 1 team in the NFCA Top 25 softball rankings for a fourth straight week.

The (39-1) Marlins previously won the Old Dominion Athletic Conference (ODAC) regular-season title to secure the top seed for the conference tournament this coming weekend at the James I. Moyer Sports Complex in Salem, Va.

The top four remained the same for a third consecutive week, with Texas-Tyler (37-2), Berry (37-2) and Luther (33-3) all undefeated again over that seven-day period.

Texas Lutheran (34-4) moved up another three places despite being idle for a second straight week as it awaited the Southern Collegiate Athletic Conference tournament, taking over the No. 5 slot, while St. John Fisher (29-5) moved up four places to sixth, Moravian (33-3) remained seventh and Messiah (29-6) moved up one place to eighth. Trine (28-4) slipped three places to ninth and East Texas Baptist (33-6) returned to the top 10 as part of a tie with Rowan (29-5).