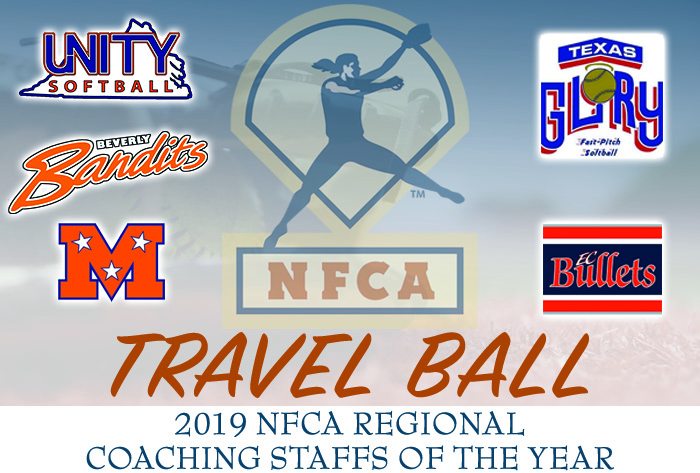 LOUISVILLE, Ky. – Five programs were voted by their peers as 2019 NFCA Travel Ball Regional Coaching Staff of the Year, announced the Association on Tuesday afternoon.

It marks the fourth straight year for the Tennessee Mojo organization and second overall for the 2021 squad (2017). Additionally, a Conroy-led Bandits team is recognized for the second time in three years.

Atlantic Coast Elite Showcase Champions… Fourth-place showing at NFA National Championship… Finished 17that the USA Softball JO Cup… One of the 18u players organized and ran a Hurricane Relief Drive to help those in need following Hurricane Florence that devastated the Carolinas… Nine of 11 players signed National Letters-of-Intent.

16u National Champion… Posted a 28-1 mark in elimination games… Captured first place at PGF Labor Day Tournament, King of the Hill, PGF Shootout and Demarini Invitational… Posted an 8-0 record at the Elite 1… Finished tied for fifth in final National NPS Rankings (US Club Rankings) for 16u.

Captured 2019 16U USA JO Cup, the eighth national title for the 2021 squad, with a triumph over the Williamsburg Starz… Finished tied for 10th in final National NPS Rankings (US Club Rankings) for 16u.

Easter One Day, USSSA Tournament of Champions and USSSA South National Championship… Put forth a fifth-place showing at the 12U PGF Nationals…

NFCA Travel Ball Coaching Staff of the Year award winners are voted on by fellow NFCA Travel Ball members within their respective regions. Only NFCA members are eligible for nomination and able to vote.

To be recognized by your peers, gain access to our Drills Database, receive an exclusive Coaching Toolspackage (new each year) presented by USSSA, and many more member benefits, JOIN TODAY.