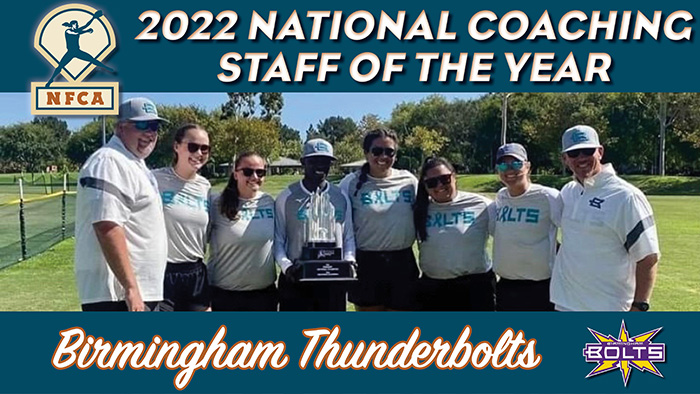 LOUISVILLE, Ky. – The Birmingham Thunderbolts (18U)  were voted the 2022 NFCA Travel Ball National Coaching Staff of the Year, the Association announced on Monday afternoon.

The Thunderbolts, under the direction of head coach Rocky Thompson, captured the 2022 PGF 18U Premier national championship, held in Irvine, Calif. After a 2-1-1 record in pool play, the Thunderbolts rattled off six victories, including a 2-1 win over NW Bullets in the title game.

Birmingham Thunderbolts (18U), a representative of the South Region, was joined by Churchville Lightning (Md.), PA Pennsbury Gems, 14U Texas Glory Naudin and Lady Magic (Calif.) as Travel Ball Regional Coaching Staff of the Year recipients.

Winners are voted on by Travel Ball member head coaches. Thompson and his staff will be honored at the annual NFCA Awards Brunch, Dec. 10 at the 2022 NFCA Convention in San Antonio.