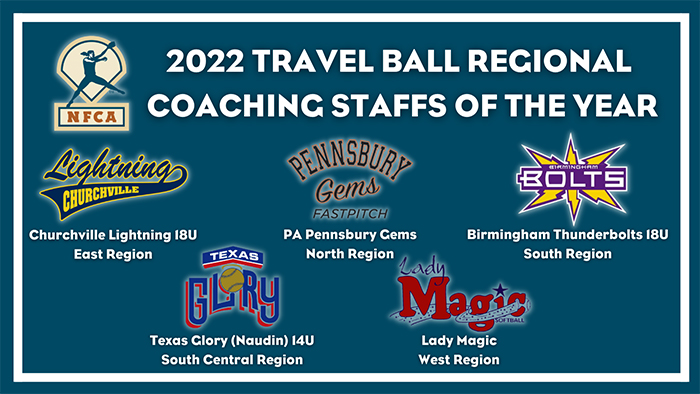 LOUISVILLE, Ky. – Five high school programs were selected by their peers as a 2022 NFCA Regional Coaching Staff of the Year, the Association announced on Tuesday afternoon.

Representing each of the NFCA’s five travel ball regions, these respective coaching staffs – Churchville Lightning 18U (East), PA Pennsbury Gems (North), Birmingham Thunderbolts 18U (South), Texas Glory (Naudin) 14U (South Central) and Lady Magic (West)- are now eligible for the NFCA Travel Ball National Coaching Staff of the Year award, which will be announced on October 3.

Posted a 53-2 mark over the course of the spring/summer season, winning their final 30 contests… Captured eight of 10 18U Open tournaments and placed second in the other two … Topped the field at the USSSA Maryland State 18U Open Championship, the 18U Open USSSA Eastern Nationals and WFC Nationals … Earned a top-10 power ranking via the USSSA sanctioned body and was the National points leader … Off the field, raised money and volunteered at events for Mothers Against Drunk Driving (MADD) … Participated in fundraising activities for cancer, including breast cancer awareness.

Coach Michalowski assembled a completely new 18U squad for the 2021-22 travel season … Under the coaching staff’s guidance, the team featured stellar offensive and defensive skills sets, including grooming three Pennsylvania state players of the year … The staff provided high-level instruction, opportunities to empower the student-athletes, developed a team culture in line with the Pennsbury program and promoted each eligible player towards college scholarships that fit their academic pursuits … The program registered a 54-33-4 mark, producing 350 runs scored to 133 runs against, and finished undefeated in three tournaments.

South – Birmingham Thunderbolts (18U) (Ala.)

Earned the honor for the second straight year … Registered a 46-14 mark with a brand-new squad in the fall … Additionally, reset significant portion of the roster for the spring and was able to quickly built cohesion and chemistry resulting is a strong summer  showing … Earned multiple top-five finishes, including earning co-championships at the 14U Tulsa Elite Invite and 14U Top Club Nationals … Placed runner-up at the USA NF Fall Shootout and 14u Alliance Cup State 1, while posting third-place finishes five times.

Served as the coaching staff for the 18U and 12U Lady Magic programs … The 18U squad went 31-9-1, tying for third at TCS and PGF Nationals and tied for fifth at the Colorado Power Pool … Entire 18U team signed by four-year universities … Steered 12U to a PFG Premier national title and a 83-16-2 overall record.