Beyond the Fence presented by Netting Professionals
Carol Bruggeman
348 Hits 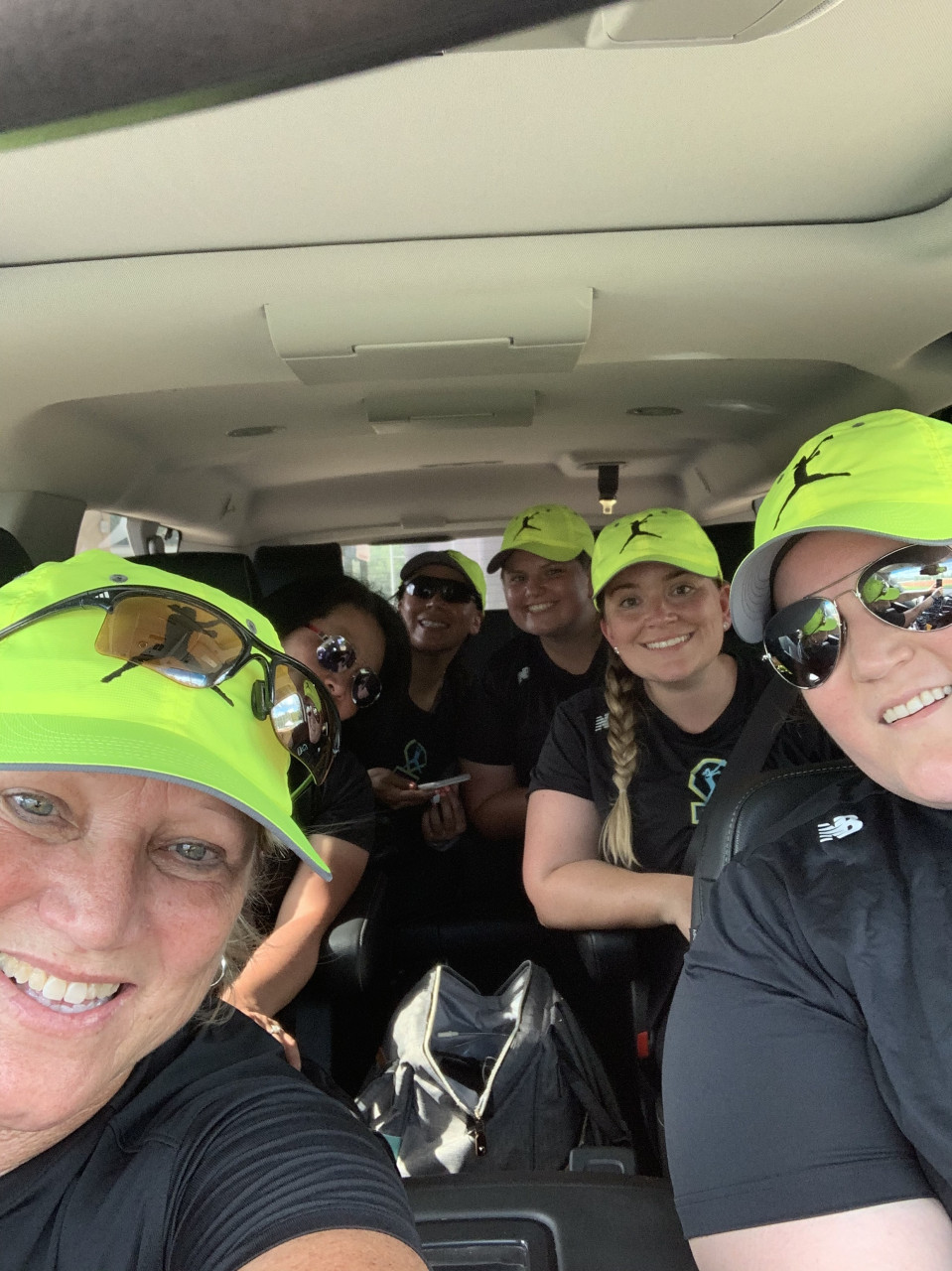 Things I hear: Lots of loud noises and lots of laughter

Things I see: Lots of people who like softball and beautiful parts of the country

Things I smell: Snacks and gasoline

Figured it out yet?

No, it's not an NFCA Hall of Famer … or a member of the NFCA team … or a famous softball coach.

It's actually not a person; it's a thing. An inanimate object that contributes to the overall success of the Association and quite frankly, we couldn't run our events without it. 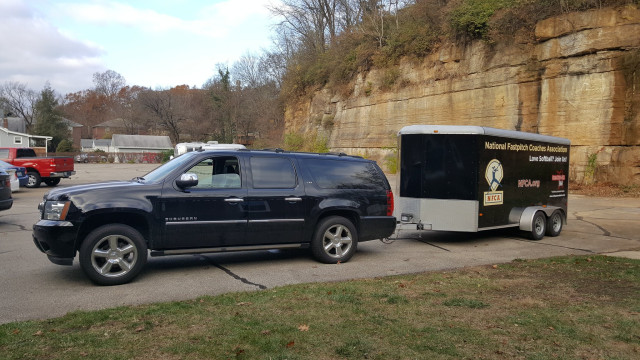 It's the NFCA trailer!

The vehicle that carries equipment and all sorts of miscellaneous items to Conventions, Coaches Clinics, Leadoff Tournaments, camps, and more!

The NFCA trailer is a bit of a beast at 16 ft. long, 4 wheels, one giant loading door, and lots of stories to tell.

The trailer itself has heard many staff tales, told second-hand we're sure, from its towing partner, a black seven-passenger Suburban.

If the NFCA trailer could talk back, here are few things you may hear … 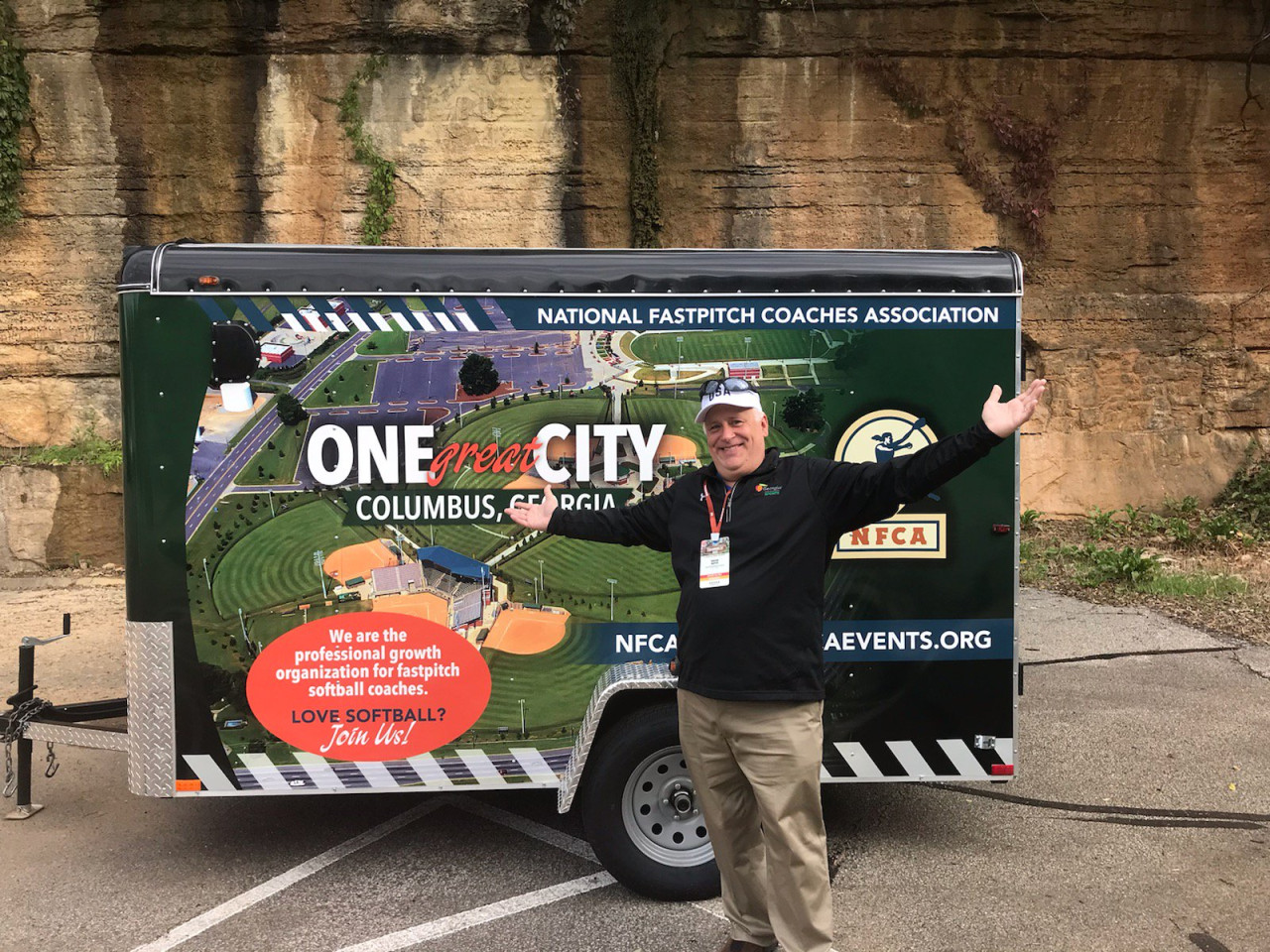 "Don't you love my tattoos?"

When our trailer cruises across the country, the beautiful artistry on the outside makes it look so good! Thanks to our good friends in Columbus, Ga., the NFCA trailer has beautiful 'tattoos', or should I say 'advertising' on all four sides. It's a terrific conversation starter as the overall look grabs many people's attention, especially at gas stations, which gives us the opportunity to talk softball with people across the country. 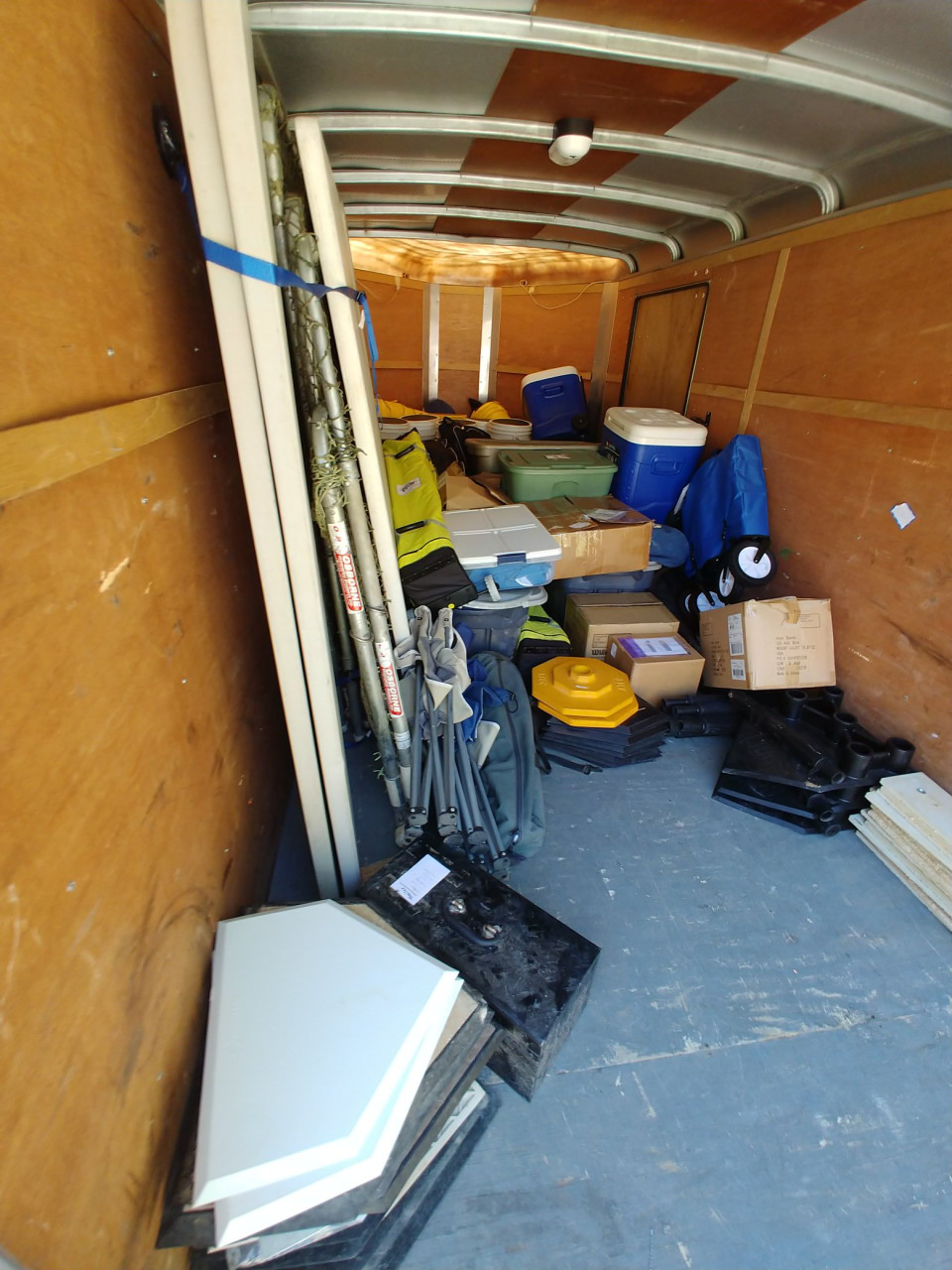 You can do it!

The NFCA brings a lot of 'stuff' to our events which means the trailer carries a heavy load! From dozens of Bownets for Leadoff Tournaments, to buckets of softballs for camps, to event attendee gifts, to NFCA flags, various registration items, and lots of signage for Coaches Clinics, the trailer is required to haul A LOT of items. And did I mention buckets? We take so many buckets of softballs to our events that our Commish (affectionate title for Jamie Hazel-White because she truly knows more about the NFCA than anyone) commands in her best Commish voice 'Buckets Assemble!' and the NFCA team quickly forms a line where we literally pass and pack dozens (like 80+) of buckets into the trailer. To say our trailer does heavy lifting is an understatement. Our ability to pack the trailer full allows the NFCA team to travel in comfort in our NFCA Suburban. 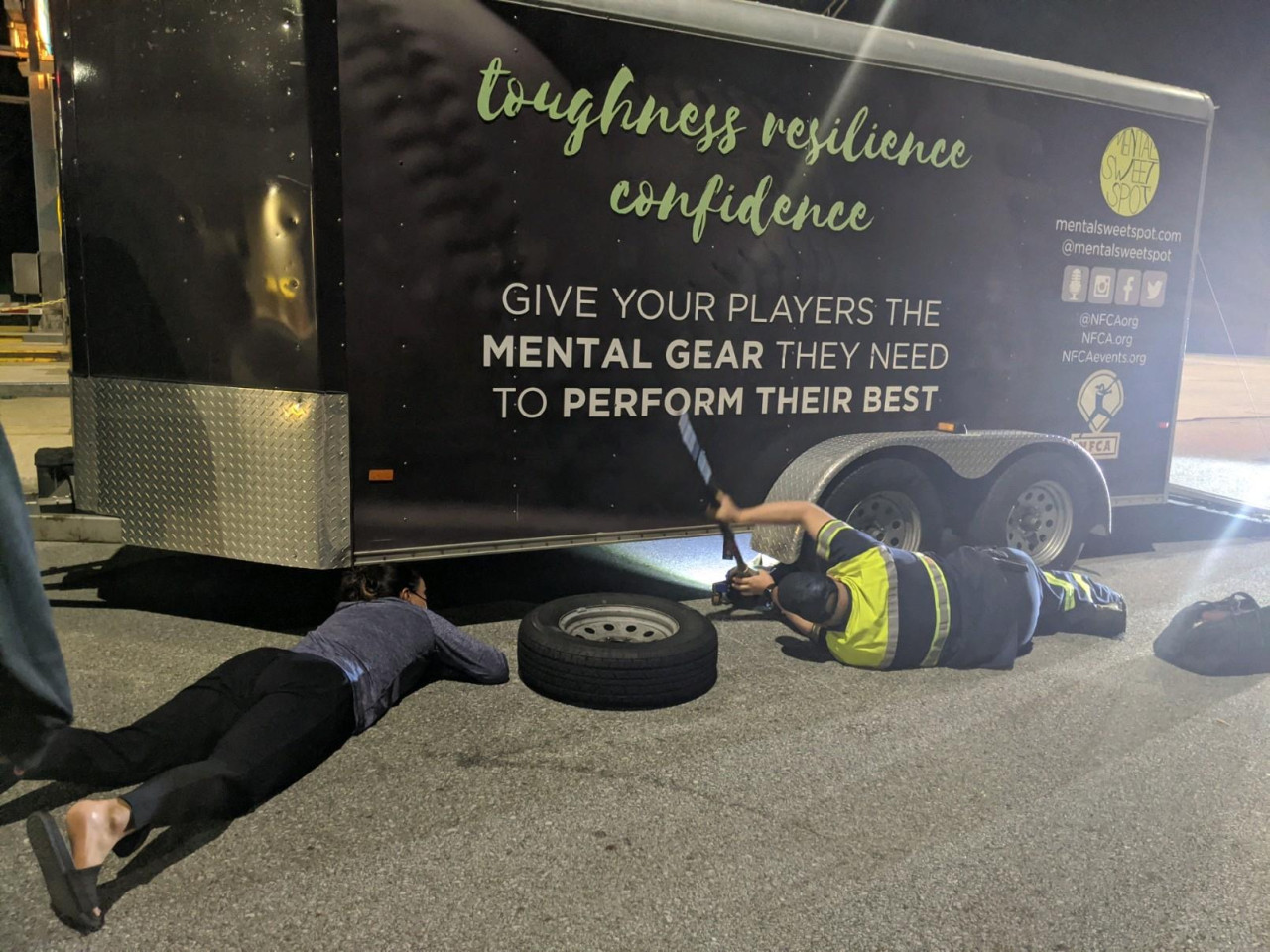 Speaking of the NFCA Suburban, while driving to a Coaches Clinic from Louisville to Kansas City, our Suburban blew the transmission (true story) and after several failed attempts at full-service gas stations, we crawled (while saying a few prayers) into a remote, small town Chevy dealership in Illinois. After deciding how we would possibly get to KC the next day for our event (no rental cars for miles, fixing the Suburban would take days, you get the idea) the Commish and I test drove a few gently-used Suburbans on the lot and you guessed it ... purchased a new vehicle right on the spot! We unhooked the trailer from the old Suburban, hooked it up the new Suburban (a perfect fit) and were on our way. After laboring at about 10 mph into the dealership, the trailer was thrilled to be cruising down the freeway again at top speed behind the new wheels. To this day, we look at our new Suburban and shake our head at the whole chain of events. 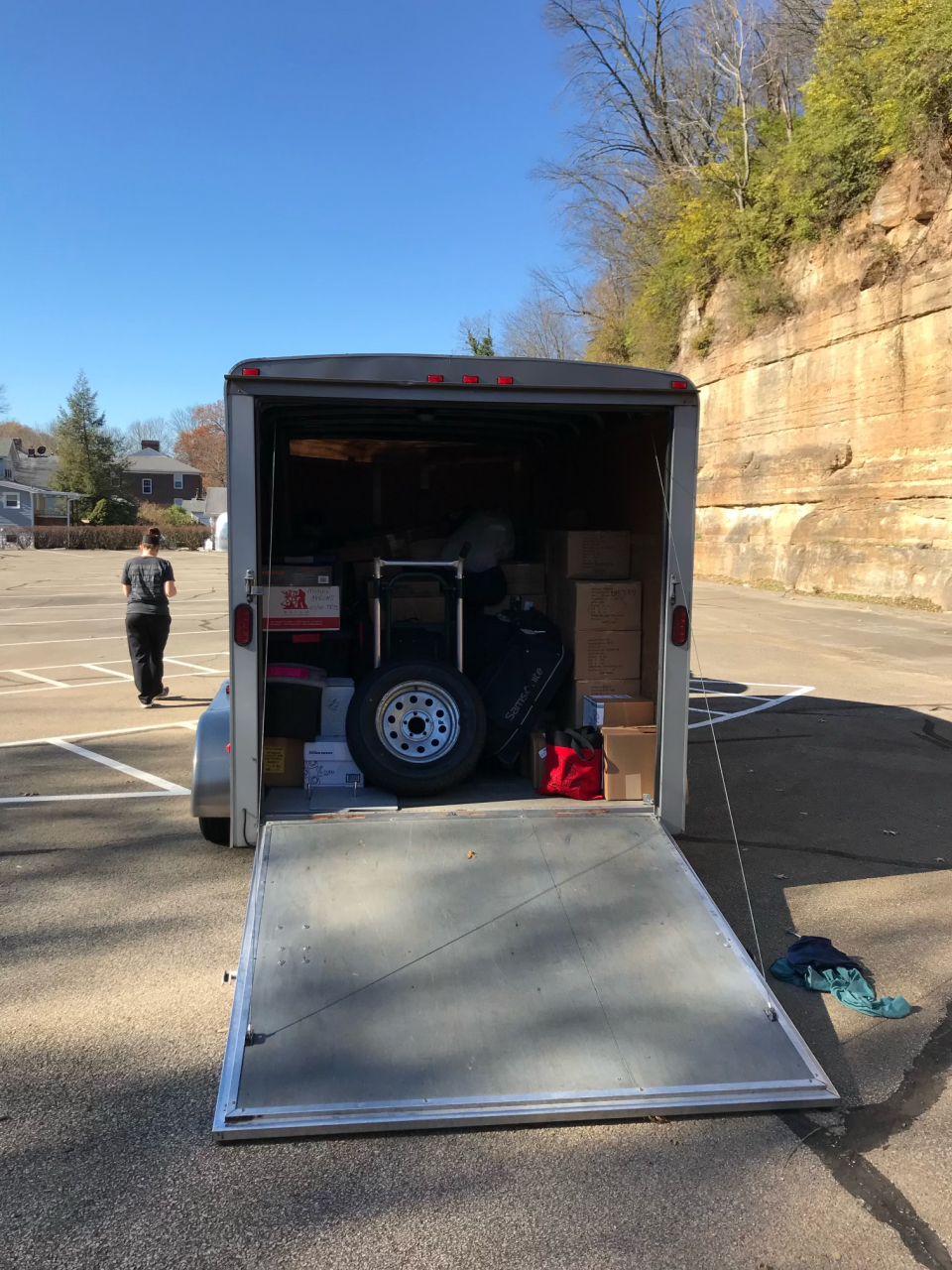 "Got any nose plugs?"

What is that smell??

The trailer smells fresh and clean before events, but after events … well, that's another story.

There is no air conditioning in the trailer – so after a long, hot camp day in Atlanta, the smell of 300 sweaty, dirt-stained jerseys fills the poor trailer and intensifies as we make the trek back to Louisville. Add a little rain/mist to those jerseys and well, nothing compares. Our trailer shows no judgment and gets the jerseys and our other items back safely each time to NFCA headquarters. 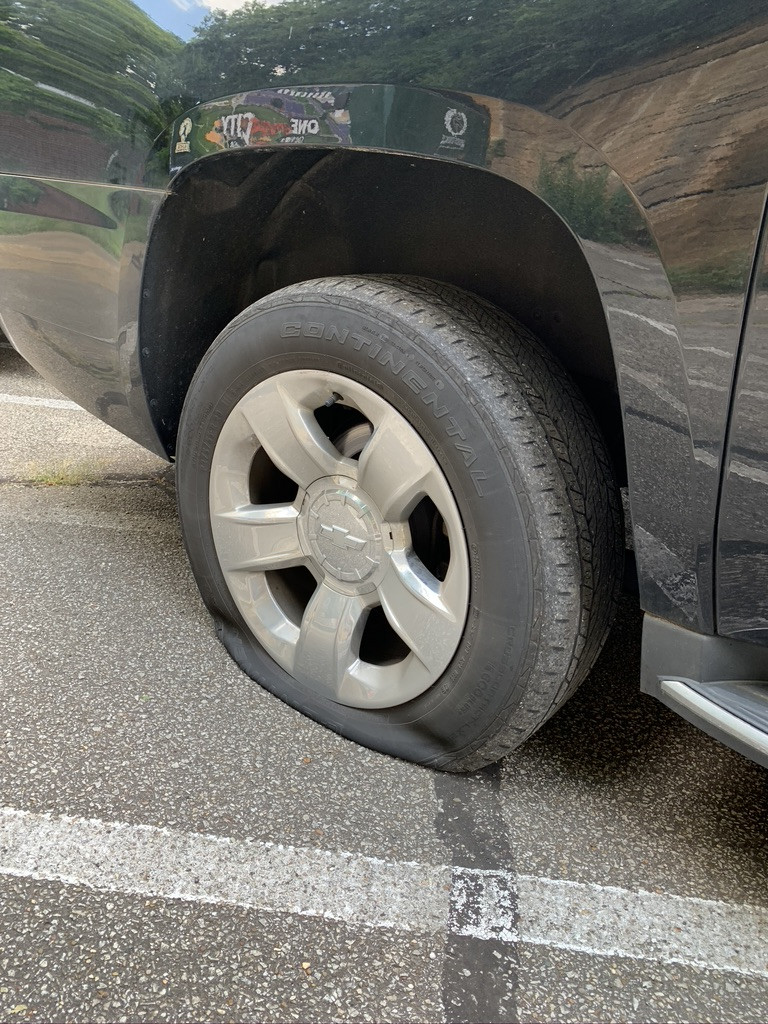 Trailers get injuries too…

Our trailer has had 'back' injuries (literally was backed into a pole) and plenty of flat tires on the side of the road in Florida, New Jersey, and Illinois. The most recent 'injury' involved some metal sheeting shaking loose (that stuff is dangerously sharp) between Atlanta and Columbus, Ohio. Fortunately, our trailer doesn't stay on the IR long, it always bounces back quickly and returns from injury as good as new. 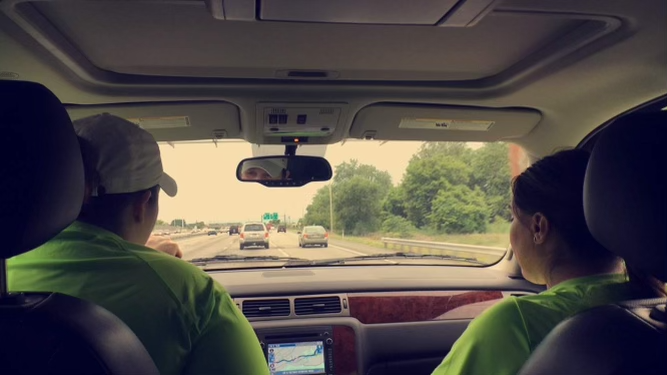 Rolling up to a camp, tournament, Coaches Clinic or Convention near you... The set is now complete! A huge thank you to @mentalsweetspot for jazzing up our big trailer! #BigAndLittle pic.twitter.com/b5VTk5C5e5

Have you ever driven a vehicle with a trailer? How about trying to go backwards? Talk about a whole new challenge! When backing up, you have to turn the steering wheel the OPPOSITE way you want the trailer to go. Oh, and the rear-view mirror does you no good with a trailer-side mirrors only. You learn pretty quickly to always leave yourself an 'out' when parking with a trailer. Lunch stops at Panera means finding a big open space in the Lowe's parking lot next door and walking a little distance for lunch. Thankfully our trailer is very patient, as it takes several tries to 'get it right' when getting in and out of various places across the country.

"You've Got a Friend in Me"

The trailer, though inanimate, cruises its way across the country with the help of its good pal, the Suburban. Now this beast of a vehicle, reliable and steady, gets the NFCA staff and the trailer wherever they need to go. The Suburban is also privy to many staff shenanigans and hilarious cross-country conversations.

If the Suburban talked back, you'd most likely hear:

'Did you ever know you are my hero?'

There are many unsung heroes within the NFCA, however none bigger than the NFCA trailer.

If you see our trailer (and Suburban) cruising down the road make sure to give them a smile and a wave as they head toward their next NFCA adventure.

More posts from author
Tuesday, 11 January 2022 The Team Behind the Team
Thursday, 28 January 2021 The 'Head Coaches' of the NFCA