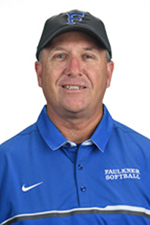 Piloting the Faulkner softball program since its inception in 1992, Hal Wynn is coming off his most successful season in 2018. Under his direction, the Eagles reached the NAIA World Series for the first time in program history and recorded a school-record 48 victories.

Wynn has worked at the University the past 32 years. Along with his softball duties, he is in his fifth year as Faulkner's athletic director, following 10 years as the assistant athletic director.

Under his leadership Faulkner has posted winning records in 15 of the last 23 seasons and has recorded at least 25 wins in all but seven seasons. The program has also accumulated 30 or more wins nine times and earned bids to the NAIA Region XIII tournament in 12 of the last 13 seasons it was held.