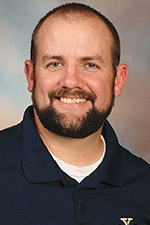 Halley is a coaching veteran, having enjoyed stints at the collegiate, high school and travel ball levels. Currently, Halley is the head coach at St. Pius X, a program he has been associated with since 2004. Taking over as head coach in 2008, he has guided the program to three district titles in 2011, 2014 and 2016.

He has also served as St. Pius’ athletics director for four years (2011-15). Under his watch, the Lancers claimed state titles in volleyball and girl’s soccer, while the boy’s soccer and baseball programs also reached the state tournament. In 2014, St. Pius earned the recognition as the STLhighschoolsports.com small schools athletic program of the year. Additionally, he spent eight years as an assistant coach at Maryville University (St. Louis), helping the program claim three conference titles and a pair of trips to the NCAA Tournament (2004 & 2008).