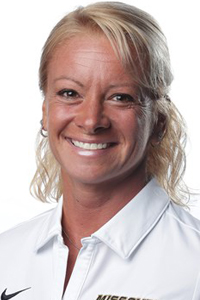 As Larissa Anderson enters year three as Missouri's head coach, the program has already gotten off to a successful start, and her ability to change the culture of the program in such a short time was a big reason why. Anderson has led Mizzou to a 54-32 record in her year and a half tenure, and owns a career record of 184-105-1 as a head coach.

Anderson finished her first season in the Black & Gold with a 35-25 record, the most wins for the Tigers in a single-season since 2016, when they won 42 games. Anderson's squad was also stellar in her first season as part of the always elite Southeastern Conference, as the Tigers' 12 wins during SEC play, which resulted in a tie for fourth place, were the most conference victories for Mizzou since 2016. The season ended with the Tigers' 13th straight regional appearance, as Anderson's Tigers earned a spot in the Los Angeles Regional, where they went 3-2, pushing host No. 2 UCLA to a winner-take-all game seven.

Anderson joined Mizzou after a 17-year run at Hofstra, the final four as the head coach. In four seasons at Hofstra, Anderson fashioned a 130-73-1 (.640) record with a pair of NCAA Tournament appearances, two Colonial Athletic Association (CAA) titles and four winning seasons. She picked up her 100th career win with the Pride's 7-2 win over Boston University, March 17, 2018, and posted seven career wins over nationally-ranked opponents, including three in 2018—a 1-0 victory over then-No. 13 Florida State on March 2 and a pair at No. 22 James Madison to claim the CAA Tournament crown.