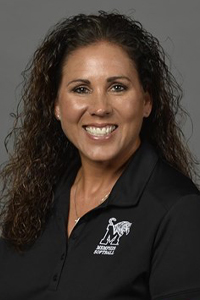 Head coach Natalie Poole enters her ninth season at the helm of the University of Memphis softball program and 19th year overall as a head coach. In her head coaching tenure, she has compiled a 512 victories and has guided two teams to the NCAA Regionals. In eight years at Memphis, Poole has led 18 all-conference athletes, 67 NFCA Scholar Athletes and 92 all-academic team members.

Poole became the U of M's softball program's second head coach in 2012 after spending three seasons leading the way at McNeese State. She guided the Cowgirls to three-straight 30-win seasons, including a school-record 38 wins in 2010. Poole guided McNeese State to two Southland Conference (SLC) tournament championship games, winning the title in 2010 and advancing to NCAA Regionals. A former standout catcher for McNeese State as a player, Poole compiled a 100-84 overall coaching record during the three years and went 55-35 in conference play.

Prior to returning to her alma mater, Poole served as the head coach for seven seasons at Georgia Southern, where she compiled a 212-215 career record. The Eagles went 71-53 in the Southern Conference under her tutelage and earned a trip to the NCAA tournament in 2006. She was named the SoCon Coach of the Year in 2002, her first year as a head coach. During her time at Georgia Southern, the Eagles had just one losing conference season and finished outside the top-four only once. The program set more than 15 single-season records with four of the top six all-time home run seasons occuring under her tenure.