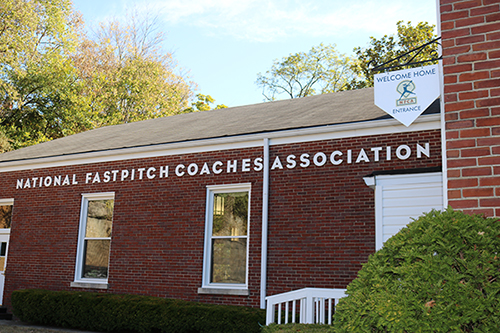 Established in 1983, the National Fastpitch Coaches Association (NFCA) is the professional growth organization for fastpitch softball coaches from all competitive levels of play. Although collegiate coaches comprised the majority of the organization's membership in the early days, today they are joined by high school, travel ball, professional and international coaches, along with umpires, clubs, companies and fans of fastpitch softball. Growing from 40 members in 1983 to over 5,500 today, the NFCA boasts members from all 50 states and several international countries.

The national office, located in the Crescent Hill community of Louisville, Ky., is the home base of 10 employees, 19 Board members and seasonal interns, moved to the Bluegrass State in 2012.

The Diamond of Ethics of NFCA Membership

Commitment, Integrity, Respect & Professionalism: these serve as the foundational ethical bases of the NFCA. These principles govern how NFCA members are expected to speak, write, and act at all times, on and off the field.

COMMITMENT: We are committed to being the best coaches we can be. We are both students and teachers of the game, striving both to learn more and to share our knowledge for the betterment of the sport and those involved in it. We are committed to the safety of those who play, coach, and officiate the game.

RESPECT: We respect our colleagues, our student-athletes, our umpires, our opponents, our fans, our institution, our community, competition, and the game. Respect is demonstrated in how we act and interact with others, how we coach, the words we use and how we say them. This means we treat others and the game with the highest regard.

INTEGRITY: We value and believe in honesty and character. We follow both the letter and the spirit of the rules that govern our sport and the law. Our relationships and our conduct are rooted in truthfulness and the intent to do no harm to others or the sport.

PROFESSIONALISM: We hold sportsmanship and the way we conduct ourselves in and around this game to the highest level. While we coach, play, recruit, cheer, umpire, and discuss the game with great passion, we also recognize that we must do these things with courtesy, common decency, and respect. We are guardians of the game and we act accordingly.

As a member of the NFCA, I fully accept these Ethical Standards and Expectations. I understand that if my actions are found to fall below these Ethical Standards and Expectations, as determined by the NFCA Executive Director and the NFCA Executive Committee, consequences could include a reprimand, notification to my institution, a loss of member benefits and/or a revocation of membership.