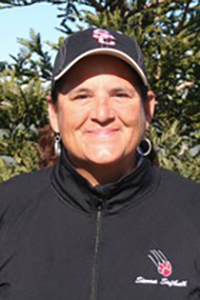 Darci Brownell enters her 19th season as the Wolverines’ head coach. Under her guidance, Sierra won a 2014 CCCAA state title, posted a state runner-up finish in 2009 and made 18 trips to the state playoffs, including six appearances in the elite eight. In 2014, Brownell and her staff were recognized as the NFCA’s Cal JC National Coaching Staff of the Year. She was also named Big 8 Conference, NorCal and State Coach of the Year in 2010. The 2009 squad won a school-record 44 games, contributing to Brownell’s stellar coaching mark of 671-194-1 at Sierra. She has tutored 26 NFCA All-Americans and 99 student-athletes have gone on to earn collegiate scholarships.