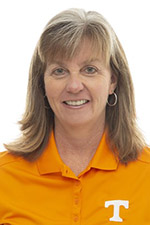 Karen Weekly, who was inducted into the NFCA Hall of Fame in 2018, is a 22-year collegiate softball head coaching veteran boasting 1,073 career wins. Along with her husband co-head coach Ralph Weekly, a 2011 inductee, Karen has guided the Lady Vols to seven Women’s College World Series appearances, including national runner-up finishes in 2007 and 2013. Tennessee has captured 10 NCAA Regional championships, seven NCAA Super Regional championships, SEC Tournament championships in 2006 and 2011 and a 2007 SEC Regular Season title. Having served as co-head coach of the Tennessee program since 2002, Weekly has compiled an impressive record of 850-259-2 (.765), averaging more than 47 wins per season over the last six years.