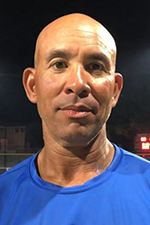 Kevin Shelton, the co-founder and longtime leader of the Texas Glory organization, is the head coach of the 18u Gold team, which has been ranked in the top 11 nationally by U.S. Club Softball for seven consecutive years. Shelton and his staff have been named the NFCA Travel Ball South Central Region Coaching Staff of the Year twice and garnered the Association’s national honor in 2014. Additionally, he is the General Manager of the Ballfields at Craig Ranch facility. Shelton founded the NPF’s Dallas Charge and was the team’s general manager in 2015 and 2016, while also serving as the NPF’s Scrap Yard Dawgs’ general manager at its inception.

Regarded as a groundbreaking summer (2014) from an 18U South Central Region perspective, the Glory finished fifth (highest in their region) in the U.S. Club Rankings. Working with 21 future Division I student-athletes, the staff guided their squad to several top 6 finishes, highlighted by winning the 18 Power Pool of the Colorado Fireworks Super 64. The win in Aurora was the first for a team out of Texas in several years and also snapped the Firecrackers (Calif.) six-year winning streak.

Shelton started coaching as an assistant with the Black Sox from 1997 through May of 2000.

Prior to that he served as a Commissioner in the United States Navy and spent an additional eight years, one month, 14 days in the submarine force. While in the Navy, he earned his master’s in information systems. After leaving the Navy in 1995, he worked for Procter and Gamble and Frito Lay in their marketing departments.

He attended Clearlake High School in Houston, Texas where he played football and ran track, finishing in the top ten percent in his graduating class. He also graduated from Texas A&M University where he studied nuclear engineering.