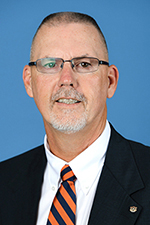 Mickey Dean was hired on Sept. 14, 2017 as Auburn's third head coach in program history. In 13 years at the collegiate level, Dean has coached eight NCAA Tournament teams, including one super regional participant, and won nine conference championships. He has amassed a 543-177 (.754) career record and a 11-year, Division I record of 478-172 (.735), having coached one season at the junior college level.

Dean led Auburn to a 15-0 start to open the 2018 season, which tied the best start in program history and were the most wins in SEC history among first-year head coaches. He earned his 500th career win during the Wilson/DeMarini Classic when Auburn earned a shutout win over Western Illinois on Mar. 4. He led the Tigers to their 800th win in program history with a 2-1 victory over Kennesaw State on April 4.

Dean has tutored 71 all-conference players, 41 all-region honorees and seven NFCA All-Americans, including 2017 Schutt Sports/NFCA National Player of the Year, Megan Good. He has also been touted as the conference coach of the year eight times.

During his five-year stint at James Madison, Dean compiled a record of 237-56 (.809). He amassed five 40-win seasons, including the final two campaigns with 52 and 50 victories, respectively. The Dukes broke 104 program records, including over 40 pitching records while boasting one of the nation's top staffs under Dean's guidance.