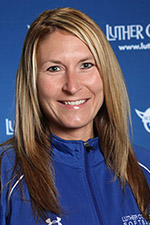 Renae Hartl enters her 18th season as Luther’s head coach in 2019. She collected her 500th career victory during the 2017 campaign and has posted a 557-182 (.750) record over her career. Hartl has guided the Norse to 11 NCAA Division III Tournament appearances in the last 12 years, including five National Championship Finals (four straight from 2010 to 2013), posting a third-place finishi in 2018, fifth-place showings in 2010, 2012 and 2013 and seventh in 2011. The five-time Iowa Conference Coach of the Year has led the Norse to six regular season league titles and five Iowa Conference tournament crowns. Collectively, she has coached 20 NFCA All-Americans, 69 NFCA Midwest Region selections, 77 all-conference honorees, four Iowa Conference MVPs and three league pitchers of the year.