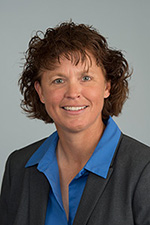 Robin Baker has served as an assistant coach with the Wisconsin-Eau Claire program since August of 2001. Baker played an important role in the Blugolds first NCAA Division III national title in 2008 and a third-place finish in 2007. Additionally, she his UW-Eau Claire's Senior Woman Administrator. Before arriving in Eau-Claire, Baker was the head coach for both the softball 1990-99) and volleyball (1990-98) programs at Wartburg College. Under her guidance, both programs earned at-large bids to the NCAA Tournament in 1994 (softball) and 1997 (volleyball).