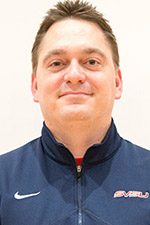 Todd Buckingham has been the head coach at Saginaw Valley State since 2013. He has guided SVSU to six consecutive winning seasons, collecting 32 or more wins in four of the last five seasons. Buckingham’s Cardinals have posted a 173-113 overall and 93-57 Great Lakes Intercollegiate Athletic Conference marks during his tenure and reached the Midwest Regional final in 2017. Prior to SVSU, Buckingham was the first ever head coach at IU Southeast. In six seasons, he guided the Grenadiers to a 186-111 record, six straight Kentucky Intercollegiate Athletic Conference (KIAC) titles and three National Association of Intercollegiate Athletics (NAIA) postseason appearances, including a trip to the national championship finals in 2012.