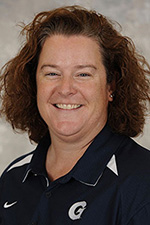 Pat Conlan enters her 14th season as the Georgetown softball head coach and her 24th year overall of coaching the collegiate level. Conlan transformed the club team into a Division I program in 2006, serving as the program's first and only head coach. The 2014 campaign was a memorable one as Georgetown set a program record with 26 wins, finishing with a 26-22 overall record and a 12-8 mark in BIG EAST play, earning the No. 3 seed in the BIG EAST Championship. Four student-athletes were named to the post-season All-BIG EAST teams, and junior Megan Hyson was also named to the National Fastpitch Coaches Association (NFCA) Division I All-Region Team. Additionally, the softball team excelled in the classroom, as 12 Hoyas were named to the BIG EAST All-Academic Team.