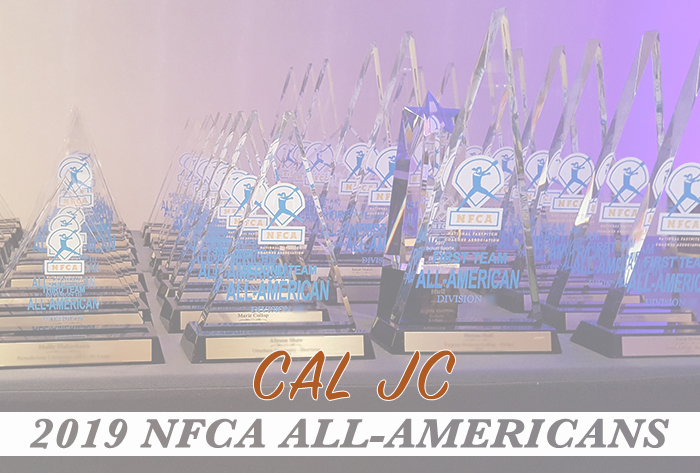 Fisher was joined by her teammates, outfielder Megan Wachholz and catcher Kendall Kates. Wachholz is second on the squad with a .474 batting average, 55 hits, 41 runs and a .541 on-base percentage. She tops the Comets with 18 walks and nine stolen bases. Behind the dish, Kates has thrown out eight runners at a 33 percent clip and owns a .991 fielding percentage. She’s also hitting .412 with eight doubles and 28 RBI.

Also coming from eighth-ranked El Camino is utility player Jocelyn Hernandez, who patrols the outfield and also leads the Warriors in the circle. She owns a .414 batting average and matches Lewis with a team-best 16 doubles and 29 RBI. Hernandez is 15-1 with a 1.41 ERA in 104.1 innings of work. She also tops the staff with 23 appearances, 10 complete games and two saves.

Mt. San Antonio’s trio includes pitcher Briana Wheeler, infielder Vicky Gutierrez and outfielder Ally Longtree keyed the second-ranked Mounties to a 22-0 South Coast-North mark and 36-4 overall record. Wheeler, the 3CFCA Pitcher of the Year (South), ranks second with a 0.78 ERA and fifth with 186 strikeouts. She is 21-1 with six shutouts, surrendering 65 hits and holding her opponents to .149 batting average in 134.1 innings of work. Gutierrez tops Mt. SAC with a .434 average, 15 doubles, 49 hits, while Longtree (.427, 31 RBI), the South Coast Player of the Year, leads the team with five triples, 34 runs, a .691 slugging percentage and .484 on-base percentage.

In the North, top-ranked San Mateo is led by hurler Emily McAdams and outfielder Amanda Ubois-Weitenhagen, while No. 7 Sierra College is anchored by outfielder Bailynn Meek and catcher Atchley.

Spoolstra, who takes home the New Balance / NFCA Golden Shoe award, leads the CCAA with 41 stolen bases in 46 attempts. The speedster paces Cerritos with a .439 batting average, 58 hits, 46 runs and a .510 on-base percentage.