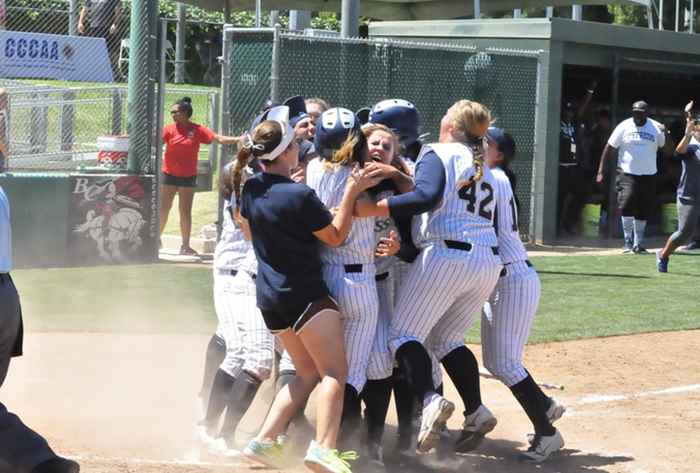 BAKERSFIELD, Calif. -Cypress College Softball program made history on Sunday afternoon, becoming the first team in CCCAA history to complete an undefeated season at 48-0. The Chargers' Emma Walker scored the game-winning run in the bottom of the seventh inning in wild fashion, when she scored from second base on a five-foot dribbler, in Cypress' 1-0 win over Mt. San Antonio College.

Walker started the rally with a one-out single to right field. Following a walk to Destiny Vasquez, freshman Val Romano topped a pitch by Mountie hurler Tiffany Kennedy-Cummings. The ball dribbled five feet up the first base line before Mt. SAC catcher Taylor Jaurique could reach it and throw Romano out at first. Already at third by the time the play was made, Walker broke for an unoccupied home plate and scored the game-winner.

"I saw no one covering home, and I just went," Walker said. "The catcher was up the line, the pitcher wasn't paying attention to me, and I just saw the opportunity and took it."

"I wasn't wheeling on that play," Pickler said. "She picked it up pretty much on her own. I saw her come around third and I just yelled go. She never slowed down."

In a pitcher's duel, Vasquez (29-0) picked up her third win of the weekend after surrendering just three hits, two walks, and fanning five batters. Kennedy-Cummings (18-3) was every much her equal, going 6.2 innings, giving up two hits, two walks, and striking out 11 Charger batters.

"Kennedy-Cummings, was dealing, and so was Lulu [Vasquez]," said Pickler. "They both pitched unbelievable games."

The win, marks the ninth overall state championship for the Chargers under Pickler. As previously mentioned they also will go down in history as the only team to finish the year with an unblemished mark.

"The 48-0 is a real special thing," Pickler said. "Our college president said, 'no one's going to beat it' and he was right. No one else can claim this, they're the first team to do it."

"We just never gave up. We we're always in every game," Walker said. "We stayed humble, and we always stayed together as a team. We needed every single person on that roster, and it's just an incredible team and an incredible feeling to get to share with them."