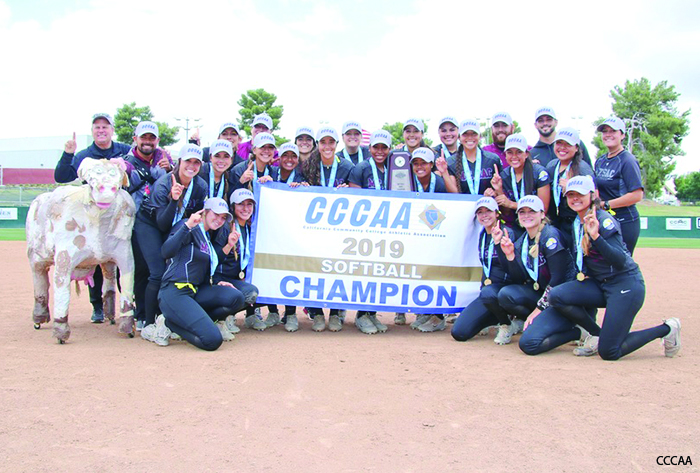 BAKERSFIELD, Calif. - In what was a wild and wet weekend up in California's Central Valley, the defending CCCAA State Softball Champs, Mt. San Antonio College, came out on top again, going back-to-back for the first time in its program's storied history. Powered by a six-run fifth, the Mounties (44-5) jumped out to a big lead against Palomar College, and then held on late in a 7-4 victory that made Mt. SAC the first back-to-back State winners since 2011 and 2012.

After having to take yesterday off, the Mounties showed no signs of rust from the jump. Mt. San Antonio loaded the bases with no outs. Sophomore Candace Haliburton made a heads up play following a foul out. She broke for home and beat the Comet catcher back to the dish to give the Mounties a 1-0 lead.

With runners on second and third and just one out, the Mounties would load the bases back-up, but freshman Catalina Aguilar, who came in for relief after the second walk of the inning, was able to minimize the damage for the Comets (41-10).

Palomar would tie the game up in the bottom of the second inning when sophomore McKenna Crawford roped an RBI single to center field, plating freshman Taylor Riley to even the score at one.

The score would stay deadlocked until the top of the fifth when the Mounties exploded for those six runs. Haliburton and sophomore Ally Longtree led the inning off with back-to-back bunt singles setting up sophomore Ciara Granado crushed the ball over the center field fence. Gutierrez followed that up with a solo shot. Freshman Quinn De Avila added an RBI triple to right and sophomore Gabby Estrada capped off the rally with an RBI base knock shortly thereafter, pushing the Mounties lead to 7-1.

In the bottom half of the fifth, Palomar would get two runs back off the bat of sophomore Sarah Fisher who launched a two-run home run to right field, and then one more in the bottom of the sixth on a double down the left field line by Crawford that brought in Riley and made it 7-4.

In the win, Mt. SAC was paced by sophomore starting pitcher Briana Wheeler (28-1). Wheeler, the Most Valuable Pitcher of the CCCAA State Championships for the second year in a row, surrendered a weekend high four runs, but also struck out four batters and walked none as she improved to 4-0 on the weekend. Granado, would be named the Most Valuable Player of the Tournament, after going 2-for-2 with three RBIs and a pair of walks on Tuesday afternoon. Granado hit .500 for the weekend and led the tournament with eight RBI. Mt. SAC shortstop De Avila was named the Gold Glove winner after being perfect at the position on the weekend.

For Palomar, Crawford finished the day 2-for-3 with a pair of RBI. Fisher, who was named the tournament's Best Hitter. finished 1-for-4 with a homer. She posted a weekend-best .588 average and .708 on-base percentage.

--- Courtesy of the CCCAA