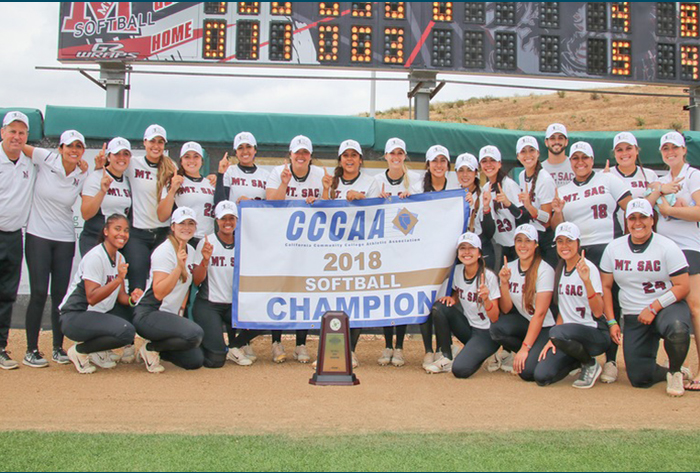 LOUISVILLE, Ky. – Guiding Mount San Antonio College to a CCCAA State Championship, Rubilena Rojas and her staff have been named the 2018 NFCA Cal JC National Coaching Staff of the Year. Under the guidance of Rojas and assistant coaches- Jim Bollier, Jessica Vogel and Alex Mascarenas- the Mounties (41-7) earned their first state title with Rojas at the helm and fifth overall.

Mt. SAC won the South Coast-North regular season and posted a perfect 8-0 mark during its state playoff run. The Mounties swept Fullerton and Canyons in the Southern Region and Super Regional rounds to earn a spot in the state championship. The hosts and South No. 2 seed edged Ohlone, 2-1, in their opener and cruised past El Camino, 10-3 in their second contest.

A 5-1 triumph over Palomar put the Mt. SAC in the championship game where it would face the Comets again. Vicky Gutierrez’s three-run homer in the bottom of the sixth and two inning of shutout relief by Jessica Olvera lifted the Mounties over the Comets, 5-4, and to the 2018 title. The 41 victories marked the program’s third straight 40-win season and fourth overall under Rojas.

Claimed the Big 8 Conference title and was ranked tied for third in the final regular season 3CFCA state rankings and second overall in the NorCal poll… Swept West Valley and College of the Sequoias in the Northern Regional and Super Regional rounds to reach the CCCAA State Championship… Finished 1-2 at the state tournament earning a first-round win over defending champion Cypress… Most wins since 43 in 2014.

Ranked tied for third in the final regular season 3CFCA state rankings and second overall in the SoCal poll… Won the Western State-North regular season… Entered the Northern Regionals as the six seed and swept Riverside City to advance to Super Regionals… Fell to 2017 national champions Cypress College in the supers… Head coach Casey Goodman was named Southern California Coach of the Year… Kylee Fahy was the Western State Conference North Pitcher of the Year and was one of eight all-conference selections.