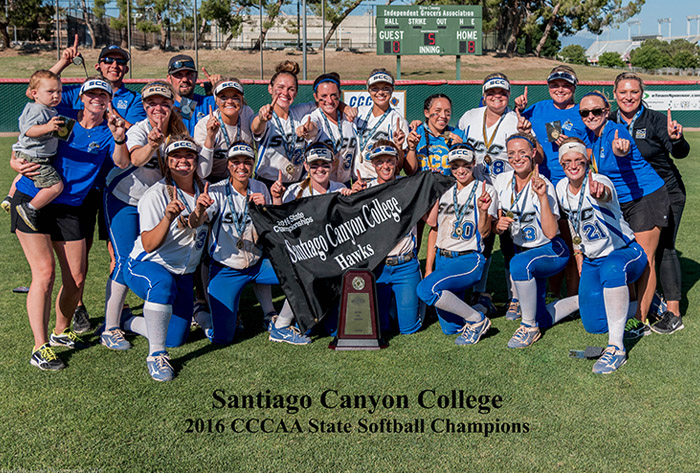 An 8-0 victory over Sacramento City College gave the Hawks their first state title. In addition, they became the first program to lose their first game of the weekend and rally to win out for the championship in 20-plus years of the tournament. After falling 8-6 to the North’s top seed College of San Mateo, Santiago Canyon reeled off wins over Cypress (7-2), San Mateo (6-1) and Sacramento City to force an “if necessary” game.

In reaching the state championship, the Hawks (41-9) recorded a 3-1 mark in the Super Regionals defeating Santa Barbara 18-0, and winning two of three, including the deciding game, against Mt. San Antonio College.

Camarco, who was hired in 2006 to lead the program in its inaugural season of 2007, just concluded her 10th season at the helm of Santiago Canyon. The Point Loma Nazarene University graduate has posted a 259-164-1 record with six winning seasons and a program-record 41 victories in 2016.

Fresno City posted a perfect 18-0 record to claim the Central Valley Conference regular season championship. The Rams reached the CCCAA State Tournament Super Regionals after rallying from a game one loss against Ohlone and topping the Renegades twice (9-0, 4-3). During their 40-win season, the Rams enjoyed a season-high 27-game winning streak.

Guided Cypress to the 2016 CCCAA Softball State Championship tournament as the top seed in the South Region. The Chargers clinched their ticket to Bakersfield by sweeping the CCCAA Southern California Super Regional, including a 3-2 walk-off win over Palomar (3-2) in the title tilt. Highlighted by a perfect 21-0 mark and an Orange Empire Conference (OEC) regular season championship, Cypress enjoyed 16 and 11-game winning streaks. It marked the 21st OEC title, all under the leadership of head coach Brad Pickler.