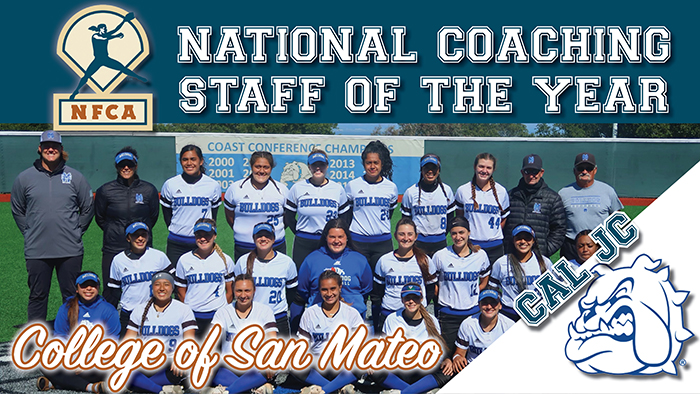 LOUISVILLE, Ky. – College of San Mateo has been named the 2021 NFCA Cal JC National Coaching Staff of the Year, the Association announced Monday afternoon. Voted by the Cal JC member head coaches and selected by their peers, head coach Nicole Quigley-Borg and her staff guided the Bulldogs to an undefeated 2021 season.

Quigley-Borg, along with assistant coaches Dale Bassmann, Toby Garza, Matt Griminger and Shelly Alifano, steered San Mateo to 27 wins, including a 16-0 mark in Coast-North Conference play. The Bulldogs were the only undefeated squad in the California Community College Athletic Association, topped the league in victories and were just one of four programs to reach the 20-win mark.

Under the coaching staff’s tutelage, the Bulldogs were the top offensive team in the CCCAA, hitting a league-best .410 and leading the league in hits (319), runs (266), doubles (65), home runs (35), RBI (238), stolen bases (65) and slugging percentage (.652). Additionally, they were second with a .458 on-base percentage and struck only 39 times, fifth lowest in the Association. In the circle, San Mateo pitchers recorded a CCCAA-low 1.32 ERA, were ranked first in hits allowed per seven innings (3.84) and tied for second with 136 strikeouts.