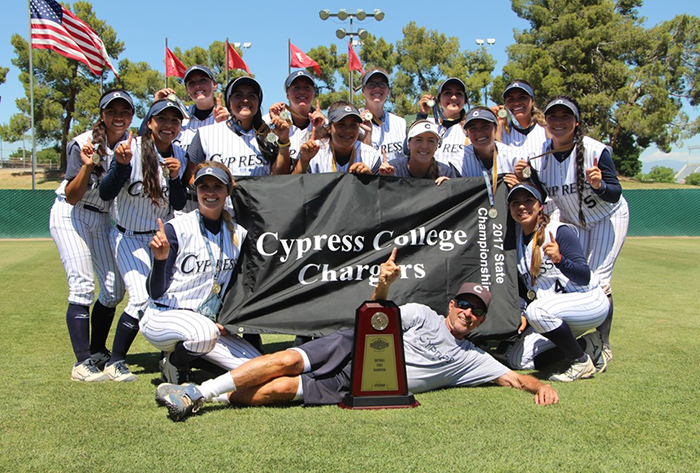 LOUISVILLE, Ky. – Guiding Cypress College to a record-breaking undefeated season and a CCCAA State Championship, Brad Pickler and his staff have been named the 2017 NFCA Cal JC National Coaching Staff of the Year. Pickler, along with assistant coaches Kevin Monahan, Victoria Castillo, Alyssa Guiterrez and Chris Brown, were also named the South Region Coaching Staff of the Year.

The Chargers’ edged Mt. San Antonio 1-0 in a wild walk-off win to claim their ninth overall state title. The victory secured an undefeated 48-0 mark and put Cypress in the record books as the only CCCAA program to finish a season with an unblemished record.

Under Pickler’s guidance, the Chargers were ranked No. 1 in the state since the second poll of the season on March 3. They rolled through Orange Empire Conference play with a 21-0 mark, while posting 29-0 and 16-0 records at home and on the road. Cypress led the CCCAA with 113 doubles and was second and sixth in on-base percentage (.468) and batting average (.385), respectively.

San Joaquin Delta claimed the Big 8 Conference title and advanced to CCCAA State Championship for the first time since 2011… The Mustangs went undefeated through the first round sweeping San Jose City, before knocking off Diablo Valley, Cosumnes River and Ohlone in supers to reach the final weekend of play… Generated 10 and 12-game winning streaks during the regular season.