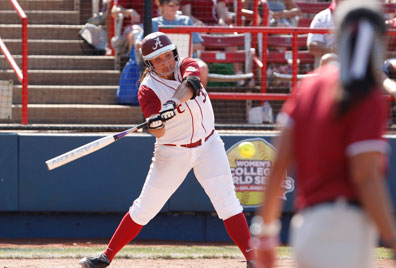 OKLAHOMA CITY, Okla. – After a tough loss in game one of the 2012 Women’s College World Series Championship Series, Alabama staved off a late Oklahoma rally to top the Sooners, 8-6, and force a decisive game three on Wednesday.

Oklahoma (54-9) was actually first on the board in the contest in the bottom of the first when Jessica Shults singled to shallow left center, allowing Georgia Casey to score for the early 1-0 lead.

However, Alabama (59-8) answered very quickly with a four-run second inning. The Crimson Tide added four additional runs in the top of the fourth to put the game just out of reach for the Sooners.

Pitcher Jackie Traina and designated player Amanda Locke accounted for six of Alabama’s eight runs in the contest, as each had a base clearing double with the bags loaded. Traina went on to finish the night at 2-for-4, while Locke went 1-for-2.

Kalia Hunt accounted for the remaining Alabama RBI in the game, scoring Jennifer Fenton on a sacrifice fly to right field. She ended the night officially 0-for-0 at the plate with a run after being walked once and hit by a pitch twice.

The Sooners mounted a five-run rally attempt in the bottom of the seventh with five hits in their fist six bats including triples from Destinee Martinez and Brianna Turang and a three-RBI home run from Jessica Shults. However, after the home run from Shults, Traina retired three of the next four batters, including two by strikeout, to end the game at 8-6.

After the game, Alabama head coach Patrick Murphy talked about the win.

“I think tonight 20 players struck to a plan that we decided on this morning. Everybody was locked in and ready to go. I could not be more proud of the team. This is what we have been working for, me for 16 years, but [the seniors] for four years. I am just excited and wish we could play right now.”

Traina improved to 41-3 with the win after allowing six runs off of nine hits with three walks and eight strikeouts over seven complete innings of work. She is now the only pitcher in Crimson Tide history to win 40-plus games in a single season.

For Oklahoma, Keilani Ricketts (37-8) suffered her first loss of the tournament after allowing two earned runs off six hits with five strikeouts, five hit batters and one walk over 3.2 innings.

On Wednesday, the two teams will meet for a winner-takes-all finale at 7 p.m. CT on ESPN. It will mark just the third time since the championship series was instituted in 2005 that a third game has been necessary.

In the first ever championship series, Michigan rallied from a game down to take home the national crown in 2005. In 2007, Arizona followed suit and won the last two games against Tennessee for the title

An Oklahoma win on Wednesday would give the Sooners and the Big 12 their second overall softball national championship and first since 2000.

For Alabama, it would be the first softball title in school or SEC history and it would be the fourth national crown over all sports for the Tide during 2011-2012 academic year. Alabama previously won national titles this season in FBS football, women’s gymnastics and women’s golf.