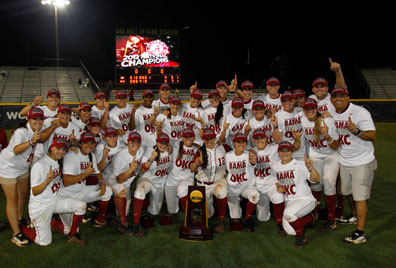 STARKVILLE, Miss. – Fresh off of its first-ever national championship poll, Alabama was named as the top team in the nation in the final USA Today/NFCA Division I Top 25 poll of the 2012 season that was released by the Association on Tuesday.

The Crimson Tide (60-8) received 28 of the 30 first-place votes in the last rankings of the year, while national runner-up Oklahoma (54-10) finished second and received the other two top votes.

Previous No. 1 and national semifinalist California (58-7) dropped to third in the last poll, while the other semifinalist, Arizona State (53-11), dropped from second to fourth. Oregon (45-18), which made its first Women’s College World Series appearances since 1989 this year, rounded out the final top five of the season at fifth.

The biggest gain of the final edition was by LSU (40-25), which went from receiving votes to seventh, thanks to a WCWS appearance. Two other schools that moved into the final rankings of the season were Hofstra (42-15) and Oregon St. (36-23). Hofstra went from unranked to 15th after advancing to the super regionals for the first time in school history, while Oregon State used a strong showing at the Norman Regional to finish the year at No. 25.