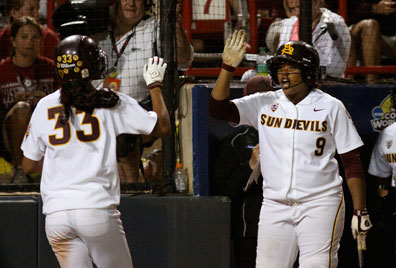 The Sun Devils (52-9) wasted no time getting on the board in the contest, going up 1-0 in the bottom of the first on a RBI double from freshman Amber Freeman. Arizona State extended its lead to 3-0 in the third inning when Taylor Haro and Katelyn Boyd scored on an error by Oregon’s Kelsey Chambers.

In the seventh, Oregon (44-17) came out swinging and immediately got on base with a double from Christine Nieto. Nieto went on to score one batter later after an error by Arizona State’s Sam Parlich to cut the lead to two.

With the go-ahead run at the plate, Oregon looked poised to make a late push for the victory. However, an unassisted double play by Haley Steele was enough to turn the momentum in the Sun Devils’ favor and allow pitcher Dallas Escobedo to fan Oregon pinch hitter Hannah Melick to end the game.

If it was early offense that led to the eventual Arizona State win, then it was the gritty performance of Escobedo that kept her team in the game. The sophomore, who is now 6-0 lifetime at the WCWS, allowed no earned runs and just one walk with five hits over a complete-game performance. With the win, Escobedo is now 24-6 on the year.

After the game, Arizona State head coach Clint Myers talked about the competition at this year’s WCWS.

“There are eight great teams here. Whoever is in in the dugout across the way, that is who you have to play. I am hoping that they are thinking the same way I am, that it is going to be a heck of a ballgame. We just have to go out and take care of business and do the things that we have prepared for and worked really hard at. We just have to execute and get the job done.

Oregon pitcher Jessica Moore fell to 32-14 on the year with the loss after allowing three runs on three hits and four walks over six innings.

Arizona State now advances to face Alabama on Friday at 8:30 p.m. CT in a winner’s bracket game, while Oregon will attempt to stave off elimination against Tennessee on Saturday at 1:30 p.m.