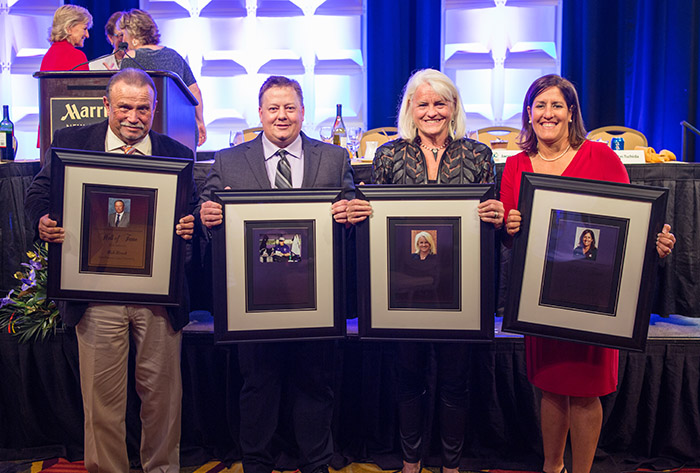 NEW ORLEANS – The NFCA welcomed four new members to its Hall of Fame at the 2016 convention on Friday evening at the New Orleans Marriott. The highly anticipated event concluded day three of the convention.

Sam Houston State head coach Bob Brock, Michigan State head coach Jacquie Joseph, former Utah head coach Mona Stevens and University of St. Thomas head coach John Tschida comprise the class of 2016. Joseph and Stevens will be recognized as part of the Pioneer category which recognizes a member that has contributed above and beyond to the sport of fastpitch softball through service, leadership, coaching and/or participation.

With over a combined 92 years of head coaching experience, Brock, Joseph, Stevens and Tschida have guided their programs to five national titles, six national championship appearances and 38 national tournaments. Under their tutelage, 64 players have garnered All-American status, while another 27 earned CoSIDA Academic All-American honors.

Bob Brock, head coach of the Bearkat softball team since 2002 and a Sam Houston graduate, ranks eighth among NCAA Division I active softball head coaches in total career victories with 1,114 wins amassed during his 33 seasons at Sam Houston, Texas A&M and Baylor.

He stands as one of only 29 head coaches in NCAA softball history to total more than 1,000 career victories and picked up his 1,100th victory during the 2016 season.

Since returning to his alma mater as head coach, Brock, the 2005 Southland Coach of the Year, has directed the Bearkats to 383 victories, the most by any head coach in Sam Houston’s 35-year softball history. His team’s achievements include Sam Houston’s first NCAA Division I regional playoff appearance (2007) and four trips to the Southland Conference tournament finals in league post-season appearances.

During his coaching tenure, he has mentored 21 All-Americans, 60 All-Region honorees and two members on gold medal-winning U.S. Olympic Teams. Additionally, Brock is a member of the Southwest Conference (inaugural class) and Texas A&M Athletic Halls of Fame.

Over the last 28 years as a head coach Jacquie Joseph has been a mentor who not only helped shape the scores of athletes who have come through her programs, but also helped shape the collegiate game.

A former NFCA president and a well-respected clinician and an author of two books and five videos dedicated to teaching and coaching the game, Joseph has instilled core values in the Michigan State softball program for the past 23 years, developing student-athletes that are successful on the field, in the classroom and in the community.

Under Joseph’s leadership, these values allow her players to not only become successful during their college career, but in their future endeavors as well. Joseph’s impact as a mentor and coach has been felt for years in the program she has built.

Joseph, who became the fifth head coach in Spartan program history prior to the 1994 season, is the winningest coach in the Spartan annals. Embarking on her 24th season in Green and White and 29th overall as a head coach, Joseph’s record consists of nearly 800 victories, 634 at Michigan State. She has guided MSU to four NCAA Regional appearances.

Joseph’s players have performed at a high level both on and off the field throughout her entire career, leading to individual accolades in the classroom as well. An impressive seven student-athletes have been named Academic All-America in her tenure, the most of any active coach in the Michigan State Athletics Department.

Stevens spent 25 years in the softball coaching world (1981-2005) and is a vital member of the NFCA, serving as the Association’s president from 2002-05. She molded her craft at the collegiate and international levels, which included head coaching duties at the University of Utah and with the USA Softball program.

In 2000, Stevens was presented with Utah’s Don Reddish Coach of the Year award after leading Utah to a 42-23 record and No. 20 ranking in the final USA Today/NFCA poll. Prior to Utah, she served as an associate head coach at UMass from 1991-94 and an assistant at Utah from 1981-84.

In addition to Stevens’ collegiate experience, she was involved extensively in USA Softball and was an instructor for the ASA Junior Olympic Program from 1984-95. The 1997 United States Olympic Committee National Softball Coach of the Year skippered the Pan-American Team in 1997 and the Junior World Team in 1999.

Stevens has spread her softball knowledge by speaking at numerous independent coaches clinics and by developing her own business with clinics for coaches and players in all 50 states and abroad.

Today, Stevens thrives as a residential realtor in Salt Lake City, being awarded the Small Team of the Year in the Salt Lake Region from 2013 to present, as well as being inducted into the Salt Lake Board of Realtors Hall of Fame in 2013. Additionally, music has been a part of her life since a very young age. Formed in 2003, Stevens is a current member of the Sister Wives band. She also spent time as the lead singer of the Mona Rae Stevens Band in Nashville.

With 22 years of coaching under his belt, John Tschida has put together a top-notch resume as a collegiate head coach. In 2004, he became the first softball coach to win an NCAA championship with two different universities (St. Mary’s & St. Thomas) and has guided his programs to a total of three national titles.

Entering his 17th season at the helm of the University of St. Thomas and 23rd overall as a head coach, Tschida is the winningest Division III coach, active or retired, with a .845 winning percentage (856-157).  Along with his back-to-back (2004 & 2005) national titles, he has guided the Tommies to six NCAA Division III Championship Tournaments, including a runner-up finish in 2006 and third place showing in 2014. Under his tutelage, 33 Tommies have earned NFCA All-America honors and 15 garnered CoSIDA Academic All-America accolades. Additionally, Tschida and his staff were honored as NFCA Coaching Staff of the Year in 2004 and 2005.

His first taste of a national title came in 2000 when he skippered St. Mary’s to that year’s Division III national crown. In six seasons with the Cardinals, he guided them to a 215-45 mark.

Spending his entire collegiate coaching career in the Minnesota Intercollegiate Athletic Conference (MIAC), Tschida has been named the league’s coach of the year 11 times with his programs being nationally ranked every season. On the field, his teams have posted an astounding 420-24 (.946) mark in conference games.

A respected clinician and speaker, Tschida travels the country and the world to promote fastpitch softball and educate fellow coaches.