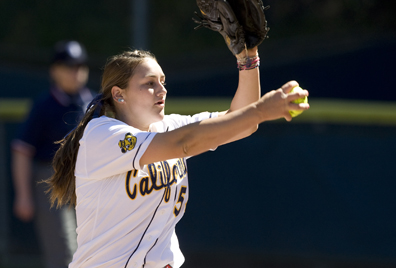 OKLAHOMA CITY, Okla. – Number one overall seed California overcame an early 2-0 deficit to top LSU, 5-3, in the game two of the 2012 Women’s College World Series on Thursday in Oklahoma City.

LSU (39-24) jumped out to a 2-0 lead in the second on a two-RBI single from catcher Morgan Russell. However, California (57-5) would battle back and tie the score with the help of Frani Echavarria, who hit a RBI single in the third and sacrifice fly in the fifth.

The Golden Bears cemented their comeback in the bottom of the sixth when they scored three runs off of four hits in the frame to take a 5-2 lead. California scored its runs in the inning on RBI hits from Cheyenne Cordes and Britt Vonk, as well as hard grounder from Echivarria that scored Jamia Reid, despite Echavarria being out on the play.

LSU attempted a comeback of its own in the top of the seventh that began with a leadoff single from Cassie Trosclair. Trosclair would cross the plate two batters later off of a double from Ashley Langoni, putting the tying run at the plate. However, California slammed the door on any comeback in the very next at bat when Juliana Santos grounded out to end the game.

Playing a major role in the win was the performance of California pitcher Jolene Henderson. Henderson exhibited grace under pressure after allowing the early lead and gave up just one run on five hits with only three walks in in the final five innings. The win moved Henderson to 37-2 on the year, while Rachele Fico took the loss for LSU and fell to 20-12.

After the game, California head coach Diane Ninemire was happy with her team’s performance in the opener.

“We fell behind early in the game, but Jolene [Henderson] hung tough on the mound for us and we just really had a great combination of our power. But mostly our short game was the factor that overturned the game for us. It was just a tremendous effort by everyone on our team today to help the success of our program.”

California will now take on Oklahoma on Friday at 6 p.m. CT, while LSU will meet South Florida at 11 a.m. on Saturday in an elimination game.