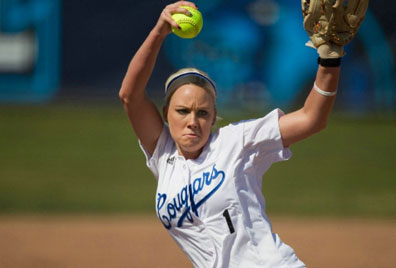 KANSAS CITY, Mo. – Powered by 19-straight victories, Cal State San Marcos has vaulted to the top spot in the first regular-season edition of the NAIA Softball Coaches’ Top 25 Poll, the national office announced Tuesday. The Cougars climbed one spot from their preseason position, garnering 11 of 20 first-place votes and 545 total points. Cal State San Marcos, which owns a record of 28-2, is making its first-ever appearance at No. 1.

The Cougars rank in the top eight in the nation in both ERA (1.04) and total runs scored (201), among other significant statistical categories. Their pitching staff of Courtney Allen, who boasts a team-leading 0.83 ERA and nine wins in 59 innings pitched, Jordan Lamoureux (1.07 ERA, 4-0 record), Kimberle Smith (0.83 ERA, 7-0 record) and Katie Wilkinson (1.45 ERA, 8-0 record) has been nearly unhittable.

Oregon Tech, the defending national champion and preseason No. 1, managed to pick up three first-place nods, but fell to No. 5 with 496 points. The Owls are off to a 17-3 start led by the power bats of Jess Plummer (six home runs) and Janelle Cromie (four home runs).

No. 2 Lubbock Christian (Texas) and No. 3 Concordia (Calif.) also gathered three first-place votes apiece as both advanced five positions in the poll. Lubbock Christian earned 532 points, while Concordia received 509. Checking in at No. 4 is Oklahoma City with 506 points.

Heavy shuffling occurred throughout the rest of the poll as well as not a single team retained the same ranking it held in the preseason. No. 15 Lee (Tenn.) made a big splash by going from the receiving votes category into the top 15. The Lady Flames are 24-5 overall and 5-1 in Southern States Athletic Conference play, including a 2-1 March 14 victory over conference rival and then-No. 9 Shorter (Ga.) in the first game of a doubleheader. William Carey (Miss.) also made a sizeable jump, soaring nine spots to No. 7 after beginning the season with a 21-4 mark.

Thirteen conferences/independent/unaffiliated groupings are represented in the poll. The Southern States Athletic Conference boasts the most ranked clubs with six: William Carey, No. 10 Brenau (Ga.), No. 12 Shorter, Lee, No. 19 Auburn Montgomery (Ala.) and No. 23 Mobile (Ala.). The Sooner Athletic Conference claims four ranked teams: Lubbock Christian, Oklahoma City, Southern Nazarene and No. 21 Oklahoma Christian.

The poll was voted upon by a panel of head coaches representing each of the conferences /independent /unaffiliated groupings. The next poll will be released on April 3.

Notes: (all information dating back to 2000) Oregon Tech’s No. 1 preseason ranking was nine spots higher than it had ever previously appeared in any poll and its first top 10 ranking since being slotted 10th on March 19, 2002 … Cal State San Marcos joins former NAIA member California Baptist, Lubbock Christian (Texas), Mobile (Ala.), Oklahoma Baptist, Oklahoma City, Oregon Tech, former NAIA member Simon Fraser (B.C.) and Thomas (Ga.) as the only schools to appear at No. 1 … California Baptist leads the way with 46 all-time No. 1 appearances, followed by Oklahoma City with 20, Simon Fraser with 18, Thomas with 13, Mobile with five, Lubbock Christian with three and Oklahoma Baptist with two … Cal State San Marcos has been ranked in 23-straight polls … No. 3 Oklahoma City has appeared in 72-straight polls, falling no lower than 18th during that stretch … Lee (Tenn.) is ranked for the first time since appearing at No. 7 in last season’s preseason poll … Evangel (Mo.) enjoys its first listing in the Top 25 since showing up at No. 20 on April 28, 2009.