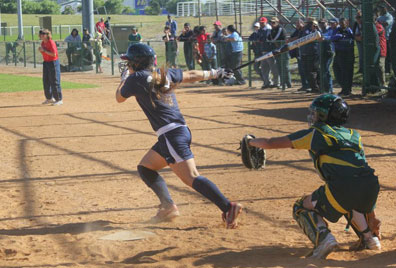 CAPE TOWN, South Africa - A no-hitter from Ally Carda helped the USA Softball Junior Women’s National Team to a 5-0 win over China at the 2011 International Softball Federation (ISF) Junior Women’s World Championship in Cape Town, South Africa. With the Friday shutout, the No. 1 seeded Americans improve to 2-0 in pool play.

“I was extremely impressed with our defensive performance today especially with how well Ally Carda pitched,” Head Coach Karen Johns (Whippany, N.J.) said. “To be honest, I was not sure the team could emotionally recharge after playing so late last night and having to come back 12 hours later. But they were ready to play today.”

Carda, who struck out the first six batters she faced, was on track for a perfect game until the fourth when she issued consecutive walks to Xu Ying and Yu Xiaotong. No other Chinese batters reached base throughout the seven inning contest. Carda struck out two in the fifth, all three batters in the sixth and one in the seventh, bringing her total to 14.

“I felt really strong today,” said Carda (Elk Grove, Calif.). “I just tried to get ahead of batters and throw first pitch strikes and I did that.”

While Carda steadied the defense, designated player Lauren Haeger led the Red, White and Blue offensive charge with a 2-for-3 performance that scored three. In the top of the third, Haeger singled to left center to score Lauren Chamberlain (Trabuco Canyon, Calif.) and Kylee Lahners (Laguna Hills, Calif.), both who singled to center field. Another Haeger single in the fifth scored Lahners, who led off the inning with a double and advanced to third on a Cheyenne Coyle (West Hills, Calif.) sacrifice bunt.

"She [Chang Hongwei] was throwing a lot of off speed at me in my first at-bat. I swung at some pitches that I really didn't want to," Haeger said. "In my next two at-bats, with runners in scoring position, I was a little more patient and made some adjustments. I took some good swings at balls in breaking position."

Team USA returns to action Saturday against New Zealand at 12:30 p.m. South African Standard Time/4:30 a.m. CT. Live stats for all of the U.S. games in Cape Town are available at USASoftball.com