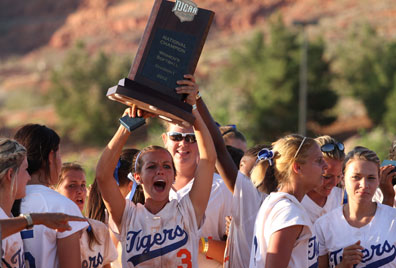 COLORADO SPRINGS, Colo. - Champions were crowned in all three NJCAA divsions last weekend as the 2012 season came to a close.  Chattanooga State fought out of the consolation bracket to win the Division I championship, while Phoenix topped defending champion LSU-Eunice to win its ninth Division II crown.  Gloucester captured its second-straight Division III title with a 1-0 shutout of Anne Arundel.

Recaps for each of the championship games are below and appear courtesy of the NJCAA.

The Lady Bruins of SLCC could not figure out tournament MVP and Outstanding Pitcher of the Tournament, Ashley Czechner. Czechner went all seven innings, only giving up one run on four hits and struck out seven. She had a 3.31 ERA in the tournament going 5-1, throwing 32 2/3 innings and struck out 37 batters.

The Tigers were able to figure out Bruin starter Ariel Zimmerman, getting to her for three runs on five hits in just 2 1/3 innings of work. The short outing by Zimmerman forced SLCC to bring in Kylee Colvin to make her first appearance in the tournament and she promptly shut down the Tigers, giving up only one run on four hits in 4 2/3 innings.

Shelby Johnson provided all the offense the Tigers would need, going two for four with two RBIs in the game. For SLCC it was a heartbreaking loss as they were only one out away from winning the title in the previous game with Chattanooga before Zimmerman was shook up by a line shot to the hip and was never the same. The Lady Bruins are the runner-ups for the second straight year, having lost the title last year to Yavapai College (Ariz.).

For Chattanooga State, this is their first softball national championship in their first trip to St. George, Utah for the tournament.

Phoenix opened the day with an 8-0 rout of Parkland College (Ill.) to qualify for the title game against the Lady Bengals. In game one, Phoenix downed LSU 5-1 thanks to two homeruns and three RBIs from designated hitter Rachel Meyer.
Game two was dominated by PC pitcher Sarah Ray, who tossed a complete game two-hitter that resulted in a 2-1 victory. The Lady Bears scored their only runs of the contest on a two-run homer from Darlene Valles.

The national championship is the ninth in school history for Phoenix, and the eighth under the direction of head coach Heinz Mueller.

The Bears proved to be one of the best power teams in the country when it mattered most. PC set two new home run records during the course of the three-day tournament. As a team the Bears set a new tourney record with 12 home runs. Meyer also set a new record for most home runs by a player in the history of the DII tournament with six while also earning Tournament MVP honors. Valles slugged three homers and was named the Outstanding Offensive Player of the Tournament.

Ray, who picked up the win in both title games, was named the Outstanding Pitcher of the Tournament.

The championship caps a remarkable year for the Lady Roadrunners, especially for pitcher Kristina Morgan (right) who lost sight in her eye in December and was told by doctors that softball was no longer in her future. Luckily for GCC, Morgan was determined to pitch again and after getting clearance to play (wearing protective headwear) she led her team through a tough bracket in Rochester to claim the program's second national championship.

Morgan baffled AACC in the title game and throughout the entire tournament. She earned both the Outstanding Pitcher and Tournament MVP Awards.

to read more about Morgan and GCC's remarkable story by Pat Ruff, The Post-Bulletin (Rochester, Minn.).