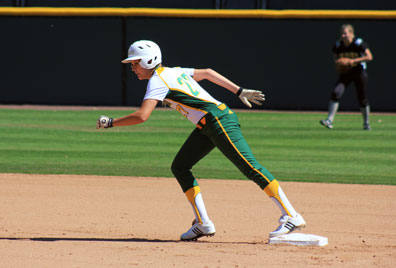 KANSAS CITY, Mo. - Concordia (Calif.) retains the No. 1 ranking in the fourth regular-season edition of the NAIA Softball Coaches' Top 25 Poll. The Eagles have already set a school single-season record in victories (48) and are currently riding college softball's longest active winning streak among any level at 41 games.

One week after earning the No. 1 position in school history, Concordia captured 20 first-place votes and 591 total points. The Eagles have not lost since a 2-1 setback to Eastern Oregon on Feb. 11. The winning streak is tied for second-longest in NAIA history and one shy of tying Shawnee State's (Ohio) mark of 42-consecutive established during the 1996 season. With four regular-season games remaining, the Eagles take on Biola (Calif.) on Saturday and wrap it up on April 17 against No. 8 Azusa Pacific (Calif.).

Holding steady for the third-straight week at No. 2 is Cal State San Marcos. The Cougars grabbed the remaining first-place vote and 570 total points. They have sat at the Nos. 1 or 2 spots all year long. During its current seven-game winning streak, Cal State San Marcos has outscored its opponents 51-8.

Both No. 3 Oklahoma City and No. 4 Central Baptist (Ark.) occupy the same spots as last week. The Stars are red-hot after scoring their 21st-straight win in their most recent game against then-No. 11 St. Gregory's (Okla.) on April 5. Oklahoma City gathered 543 votes. With 539 points, Central Baptist is 32-3 overall. The Mustangs rank in the top 10 statistically in 11 categories, including third in batting average (.398) and fourth in runs scored (8.0 per game).

Defending national champion Oregon Tech slides up one to No. 5. The Hustlin' Owls checked in with 512 total points. They have a commanding five-game lead in the Cascade Collegiate Conference with the regular season ending on April 21.

No. 25 Saint Xavier (Ill.) revisits the rankings for the first time since the Preseason Top 25. The Cougars are 20-4 after stumbling out to a 3-4 record.

Thirteen conferences/independent/unaffiliated groupings are represented in the poll. The Southern States Athletic Conference checks in with six ranked teams: No. 7 William Carey (Miss.), No. 10 Shorter (Ga.), No. 12 Lee (Tenn.), No. 14 Brenau (Ga.), No. 19 Auburn Montgomery (Ala.) and No. 23 Mobile (Ala.). The Sooner Athletic Conference claims four Top 25 teams: Oklahoma City, No. 6 Lubbock Christian (Texas), No. 17 Southern Nazarene (Okla.) and No. 18 St. Gregory's (Okla.). Four other conferences and unaffiliated groups list multiple teams in the poll.

The poll was voted upon by a panel of head coaches representing each of the conferences /independent /unaffiliated groupings. The next poll will be released on April 17.

Notes: (all information dating back to 2000) With a four-spot jump, No. 17 Southern Nazarene (Okla.) enjoyed the best improvement within the poll... The Southern States Athletic Conference has claimed six programs in the Top 25 for all five polls (including preseason)... Concordia (Calif.) joins Lubbock Christian (Texas), Cal State San Marcos and Oregon Tech as the No. 1-ranked teams this year through five polls... Oregon Tech's No. 1 preseason ranking was nine spots higher than it had ever previously appeared in  any poll and its first top 10 ranking since being slotted 10th on March 19, 2002 ... Concordia joins Cal State San Marcos, former NAIA member California Baptist, Lubbock Christian, Mobile (Ala.), Oklahoma Baptist, Oklahoma City, Oregon Tech, former NAIA member Simon Fraser (B.C.) and Thomas (Ga.) as the only schools to appear at No. 1 ... California Baptist leads the way with 46 all-time No. 1 appearances, followed by Oklahoma City with 20, Simon Fraser with 18, Thomas with 13, Mobile with five, Lubbock Christian with four and Concordia with two ... No. 23 Mobile leads all active programs with a 104-straight stretch of being ranked in the Top 25... No. 3 Oklahoma City is second and has appeared in 76-straight polls, falling no lower than 18th during that stretch; No. 6 Lubbock Christian and No. 7 William Carey (Miss.) are tied for third with 39-consecutive mentions, No. 9 Houston-Victoria (Texas) follows with 34-straight and Concordia is at 30-straight polls.