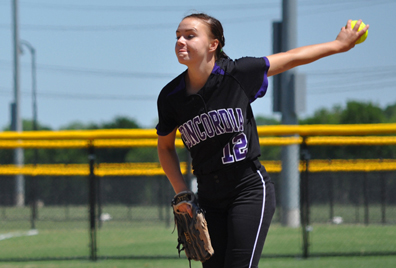 The Houston, Texas, native posted a 2-0 record this week, with both of the wins coming against then-nationally-ranked opponents (#23 East Texas Baptist and #2 Texas-Tyler). In 19.1 innings pitched, she had a 1.09 ERA, giving up just three earned runs while striking out nine and allowing opponents just a .229 batting average against her.

In three appearances, Schiefelbein helped Concordia improve its record to a perfect 4-0 this season against 2011 NCAA tournament teams (3-0 in the circle in those four games). Her two complete game wins this week included handing Texas-Tyler its first loss of the season, which also snapped a 24-game winning streak at the American Southwest Conference First Pitch Tournament. Against the Patriots, the lefty gave up just one earned run and also contributed offensively with a hit and two sacrifices. Her contribution against ETBU was similar, giving up just one earned run in the 2-1 win, while hitting a double and scoring a run.

Schiefelbein was also named the ASC West Division Preseason Pitcher of the Year and is currently 4-1 overall.