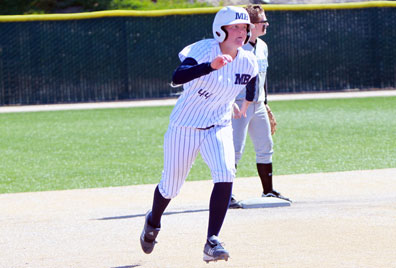 Reinhardt turned in a tremendous performance at the plate this week by going 9-for-14 with seven runs, five RBIs, two triples, one double, one home run and a walk. She finished the four-game series with Humboldt State with a .643 batting average, a .667 on-base percentage and a 1.214 slugging percentage.

The Riverside, Calif., native helped the fourth-ranked Otters to a series sweep of Humboldt last week by hitting safely and scoring in each of the four games and recording multiple hits in three of the four contests.

Reinhardt currently leads her team in both batting average and ERA at .527 and 1.36 ERA, respectively. This week, the Otters will travel to Carson, Calif., for a top 25 showdown with No. 18 Cal State Dominguez Hills.

Knerem was a perfect 6-0 last week, including a win over then 16th-ranked C.W. Post, and finished with a 0.23 ERA and 51 strikeouts. The senior from Brunswick, Ohio allowed just one earned run over 31.0 innings, giving up just 15 hits, 1 walk and limiting opponents to a .138 batting average.

Twice last week Knerem had at least 10 strikeouts in a game and tossed two complete game shutouts. In the Eagles’ final game of the week against Edinboro, she entered the game in the fifth inning and led her team to a win by striking out the final nine batters in order.

Knerem is currently 10-0 on the year with a save, a 0.59 ERA and 90 strikeouts. This week Ashland will hit the road for four games with doubleheaders at Urbana and Notre Dame (Ohio).

Other Top Performances
Kacey Raines of Central Oklahoma helped the Bronchos extend their school-record win streak to 17 by hitting .588 with 11 runs, 10 RBIs and five doubles… Tarleton State’s Samantha Swanda continued her hot streak this week by going 2-0 vs. Texas A&M-Kingsville. She finished the weekend with a .156 opponent’s batting average and a 0.00 ERA over two complete games… Briauna Taylor of Grand Valley State drove in 14 runs for the 15th-ranked Lakers this week while going 18-for-35 at the dish as well … UC San Diego’s Camille Gaito won three out of four for the Tritons, including two wins over then fifth-ranked Cal State Dominguez Hills, striking out 22 in the process.