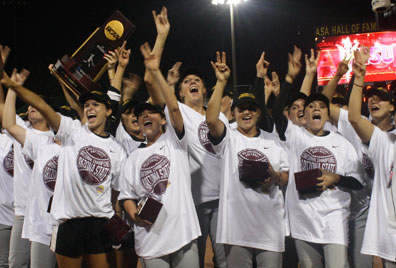 STARKVILLE, Miss. – The Arizona State Sun Devils will began the 2012 exactly where they left off last year, as the unanimous No. 1 team in the nation, according to the USA Today/NFCA Division I Top 25 Preseason Poll that was released by the Association on Tuesday.

The defending national champion Sun Devils (60-6) claimed all 30 first-place votes in the poll to top the rankings for the sixth straight edition dating back to last season. Florida (56-13) and Alabama (53-11) also remained unchanged in the preseason poll, finishing the rankings in second and third, respectively. Rounding out the top five was California (45-13) who moved up one spot from the final poll last year to fourth, while Oklahoma (43-19) shot up two spots to fifth.

The Pac-12 conference led the way in the poll with seven teams, while the Big XII and the SEC each had six teams. Other conferences placing teams in the rankings were the Big Ten and Conference USA with two schools each, while the Big East and the Sun Belt each had one representative.