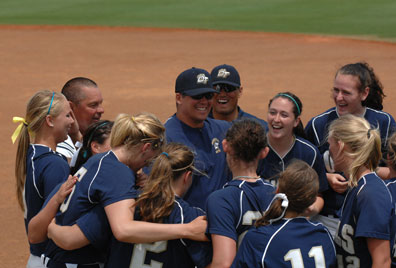 The Owls are led by reigning NAIA Coach of the Year Greg Stewart. He enters his eighth season at the helm for Oregon Tech with a record of 226-107-2. Stewart will lean on top junior pitcher Taylor Schmidt, who went 17-4 with a 2.02 ERA, and sophomore infielder Shauna Collins, who led the team with a .358 batting average.

Cal State San Marcos climbs two spots to No. 2 with 535 points and one first-place nod on the strength of a 47-11 record and fourth-place National Championship. No. 3 Oklahoma City creeps up six spots with 511 points and two first-place votes after concluding last season at No. 9 in the polls. No. 4 Central Baptist (Ark.) and No.5 Brenau (Ga.) complete the top five with 493 and 488 points, respectively. Cal State San Marcos and Central Baptist are the only holdovers from last season’s final top five.

No. 13 Auburn Montgomery (Ala.) makes the biggest jump of teams that landed outside of last season’s final poll. The Lady Senators return three-time NAIA All-America outfielder Brandi Richards and lose just two starters from a team that went 34-20. Similarly, Union (Tenn.) went from unranked to No. 17. The Lady Bulldogs bring back their top two pitchers in Brooke Thomas and Keaton Kirk after finishing last season as TranSouth Athletic Conference Tournament and regular-season runner-up.

In total, 20 squads retained Top-25 rankings from the previous poll with No. 6 Belhaven (Miss.), No. 7 Lubbock Christian (Texas) and No. 14 Lindsey Wilson (Ky.) remaining in the exact same positions. New to the poll are Auburn Montgomery, Union (Tenn.), No. 20 Central Methodist (Mo.), No. 23 Corban (Ore.) and No. 25 Oklahoma Christian.

The poll was voted upon by a panel of head coaches representing each of the conferences /independent /unaffiliated groupings. The first regular-season poll will be released on March 19, 2012. For more information about NAIA softball, click here.

Notes (all information dating back to 2000): Oregon Tech’s highest-ever previous ranking was 10th, occurring on March 19, 2002 … Oregon Tech joins former NAIA member California Baptist, Lubbock Christian (Texas), Mobile (Ala.), Oklahoma Baptist, Oklahoma City, former NAIA member Simon Fraser (B.C.) and Thomas (Ga.) as the only schools to appear at No. 1 … California Baptist leads the way with 46 all-time No. 1 appearances, followed by Oklahoma City with 20, Simon Fraser with 18, Thomas with 13, Mobile with five, Lubbock Christian with three and Oklahoma Baptist with two … No. 2 Cal State San Marcos has been ranked in 22-straight polls as it ties its highest-ever ranking this week … No. 3 Oklahoma City has appeared in 71-straight polls, falling no lower than 18th during that stretch … No. 20 Central Methodist (Mo.) checks into the Top 25 for the first time since being ranked No. 24 in the 2009 preseason poll … No. 24 Corban (Ore.) is making its first-ever appearance in the rankings … No. 25 Oklahoma Christian last appeared in the Top 25 on Feb. 3, 2004.