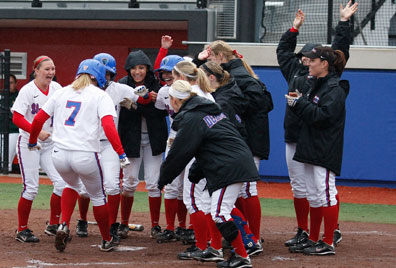 CLEARWATER, Fla. – With a perfect 5-0 record, the DePaul Blue Demons claimed the 2012 NFCA Leadoff Classic championship, after topping Hofstra 3-0. on Sunday at the Eddie C. Moore Complex in Clearwater, Fla.

DePaul led off their final contest with three hits in the opening inning, including a two-RBI double from senior Kirsten Verdun that proved to be all the runs needed in the contest. In the circle, sophomore Hannah Penna picked up her second win of the weekend by allowing just four hits in the complete game shutout.

For the tournament, the Blue Demons were led by sophomore Megan Coronado who went 5-for-8 over four games with three runs, three RBIs and a .727 on-base percentage. On the pitching side of things, both Verdun and Penna each went 2-0 and recorded identical 0.58 ERAs. For the weekend, the Blue Demons posted a team batting average of .372 and a team ERA of 0.44.

In Louisiana-Lafayette’s game with Winthrop, the Ragin Cajun’s overcame an early 1-0 deficit to come back and top the Eagles, 6-1. Senior second baseman Paige Cormier led the way for her team offensively in the game by going 2-for-2 with two runs, a RBI and a walk. Senior pitcher Ashley Brignac picked up her third win of the weekend by allowing no runs on three hits over the final four frames.

Brignac ended her weekend with a 1.05 ERA over four games, giving up just three earned runs and striking out 20. Offensively, the Ragin Cajun’s were led in the tournament by junior Matte Haack. Haack posted a .421 batting average over five games with nine RBIs, eight runs, three doubles and a triple. As a team, Louisiana-Lafayette ended the tournament with a .344 batting average and a 3.00 ERA.

After the tournament the Tennesse duo of Raven Chavanne and Ellen Renfroe were named as the 2012 NFCA Leadoff Classic Most Valuable Player and Pitcher, respectively.  Chavanne went 12-for-19 on the weekend with two RBIs and a tournament-high four stolen bases, while Renfroe went 3-0 with a 0.56 ERA and 25 strikeouts.  To view the entire 2012 NFCA Leadoff Classic All-Tournament team, click here

For complete scores and statistics for all 2012 NFCA Leadoff Classic games, click here.