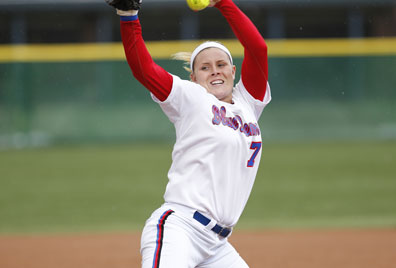 CLEARWATER, Fla. – After a second full day of play on Saturday at the 2012 NFCA Leadoff Classic at the Eddie C. Moore Complex in Clearwater, Fla., only 17th-ranked Louisiana-Lafayette and DePaul remain undefeated.

The other undefeated team heading into Saturday, USF, fell in its first game of the day to Boston University, 5-3. However, the Bulls rebounded later in the afternoon with a 6-3, come-from-behind win against Illinois State.

DePaul began their day with a 10-0, six-inning victory over Winthrop, posting 17 total hits in the contest. Junior pitcher Bree Brown turned in a stellar performance from the circle in the win, allowing just one hit and striking out eight.

In their nightcap, the Blue Demons earned a hard-fought 3-2 win over Mississippi State. Brown also played a key role in that victory as well by scoring the winning run on an error by the Bulldogs. Sophomore Kirsten Verdun allowed five hits and fanned five en route to her sixth win of the season.

No. 17 Louisiana-Lafayette began their Saturday with a 5-1 victory over Boston University that moved them to 3-0 in the tournament. Junior Matte Haack led the Ragin’ Cajuns in the game with two hits, while senior Christi Orgeron notched two RBIs on a double to left-center in the third. Senior pitcher Ashley Brignac improved to 5-0 on the year with the win, in which she allowed just one run and struck out five.

In its finale for the day, Louisiana-Lafayette picked up its biggest win of the tournament a 10-7 victory over No. 12 Michigan. Junior Nerissa Myers sealed the win for the Ragin’ Cajuns in the fourth inning with a two-RBI, inside-the-park home run to center field.

Both DePaul and Louisiana-Lafayette will look to post perfect 5-0 records for the weekend when they wrap-up their slate of games in Clearwater on Sunday against Winthrop and Hofstra, respectively.