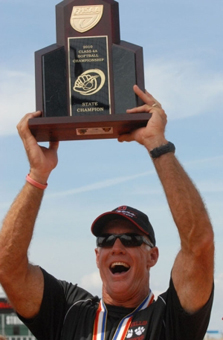 The Tigers ended their 2010 campaign with a 31-1 record and have now gone 63-2 over the past two years. Along with leading Dunnellon to a state championship in each of the last two seasons, Fagan and Williams have also helped the Tigers achieve two top five final rankings in the USA Today/NFCA Top 25 poll, finishing the 2009 season at fifth and the 2010 season in second.

In the state championship game, the Tigers defeated rival Naples, 3-2, in a nine-inning classic. Dunnellon also had the assistance of two 2010 Louisville Slugger/NFCA All-Americans this season in the persons of first-team selection Kasey Fagan and third-team honoree Sami Fagan.

For their work this season, Coaches Fagan and Williams also earned the South Regional Coaching Staff of the Year award.

Pearl River went 24-3 this past season in New York Class A and brought home the first softball state championship in the history of Rockland County. The Pirates were able to take home the hardware after beating defending champion Floral Park, 2-0, in the state semi-finals, then turning around just three hours later and defeating Pittsford-Mendon, 7-0, to claim the championship.

The state title this season is the crowning achievement in an impressive list of accomplishments that Carlacci and staff have put together over his 14 years at the helm of the Pirates. Over the past 14 years at Pearl River, Carlacci has amassed a record of 326-51 and has won at least twenty games in every season, seven sectional titles and four regional titles.

After finishing as Texas Class 5A runner-up in 2009, Laneigh Clark and staff helped lead Pearland back to the state title game this year where they topped defending champs Austin Bowie, 4-0, to win the championship.

The Lady Oilers went 37-6-1 on the year and proved dangerous down the stretch by winning 23 of their final 24 games. Despite losing 2009 NFCA Diamond Catcher of the Year Brittany Marcet to an ACL tear early in the season, Pearland was able to persevere and capture its first state title under Clark. Stepping up to help lead the Lady Oilers this season were Louisville Slugger/NFCA second team All-American Jessica Bowden and third team All-American Megan Coronado.

Massey and staff helped lead the Crimson Bears to the Alaska Large School title by defeating defending champion East Anchorage, 11-0, in the if necessary title game after losing to the Thunderbirds, 11-8, earlier in the day.

Despite the loss, Juneau-Douglass still had a very impressive run through the state tournament as they outscored opponents 46-18 over five games. The Crimson Bears also topped all tournament qualifiers in All-Tournament selections play placing Taylor Larson, Jennifer Nelson, and Brittany Fenumiai on the team.