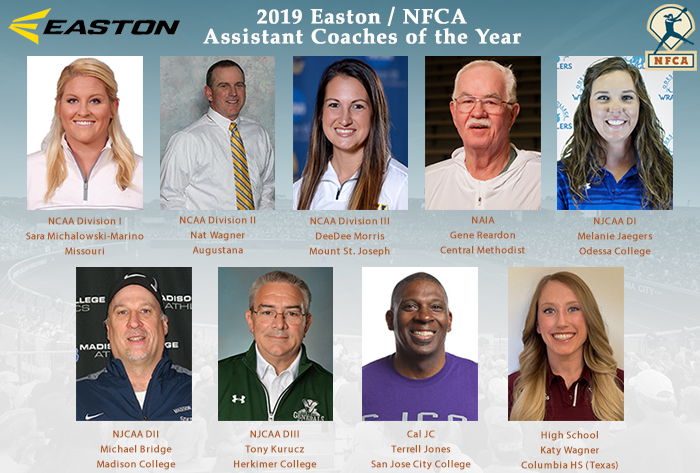 These awards salute the efforts of coaches from the various NFCA membership categories for their tireless dedication to the sport of softball and to the continued education, growth and development of young women, both on and off the playing field.

Michalowski-Marino enters her second year on the Tigers’ bench. In her first season with Missouri, Michalowski-Marino, who assists with pitching and defense, was a big key in the Tigers finishing in a tie for fourth in the SEC and having the first NFCA All-Region pitcher since 2013. Additionally, she is the team’s liaison with academic services, compliance, equipment and travel. On two separate occasions, Michalowski-Marino gave the team stability and carried out the team’s mission when head coach Larissa Anderson had to step away less than two weeks on the job and then six days before the start of the season.

“Sara makes an impact in every game and practice by what she brings to the coaching staff,” said Anderson. “But a true assistant goes above and beyond their title. They carry out the mission of the head coach, but most importantly they impact lives. Sara has not only impacted our players’ lives, but my life as well. I wouldn’t have gotten through this past season without her strength and support.”

Recently named Minot State’s head coach, Wagner spent the last three seasons on Gretta Melsted’s coaching staff at Augustana. He played a pivotal role in the Vikings’ run to a 2019 national title. During his time in Sioux Falls, S.D., Augustana posted a 143-42 record, went to three NCAA Tournaments and finished nationally ranked each season, including No. 1 in 2019. Involved in every aspect of the program, Wagner was more a co-head coach and the recruiting coordinator, lead hitting instructor, outfield and catcher’s coach and provided game prep for opposing hitters. Wagner did all this while coaching travel ball in the summer and commuting four hours during his three years on the staff.

“Nat is a giver,” said Melsted. “He goes above and beyond and is a head coach’s dream. His knowledge of the game and his ability to provide positive instruction is amazing. He is the best teammate a head coach could ever have. He is truly one of the better human beings I know. I’m extremely proud to have worked with Nat and to call him a colleague and friend.”

In her fourth season, Morris helped lead the Lions to their first regular-season HCAC conference title and program-best 35-7 record.  Assisting in overall player development, Morris is head coach Beth Goderwis’ right-hand person. She works primarily with the hitters and infielders and assists with game-day pitch calling (staff sported a top-10 national ERA at 1.47). Over the past four years, the Mount’s win total has increased each season and a lot of the success can be attributed to Morris. Additionally, her work off the field has seen an improvement in the team’s GPA, which jumped from a 3.0 to a 3.2.

“I believe DeeDee is a great candidate for this award,” said Goderwis. “She is a huge part of our team’s success over the last four years. She is a stable and consistent part of our players’ lives and is invested in the players work off the field.”

Since his arrival at Central Methodist in 2006, Reardon has helped turn the program into a top-ranked and well-respected program in the country. Under his tutelage, the offense continues to make strides which included setting high marks for average and home runs in 2019. Tireless on the recruiting trail, Reardon serves as CMU’s recruiting coordinator, hitting coach and deputy head coach. He is responsible for the number of recruits each year, helping fill both a JV and Varsity roster.

“Gene has been loyal, trustworthy, dedicated and committed to the head coach, players and the program in general,” said head coach Pat Reardon. “Gene does whatever is needed (help with move in day, hospital visits, Walmart runs) to make the parents’ and players’ experience a great one, all while being a volunteer coach. I am 100 percent positive CMU softball is not where it is today if Gene is not in the program.”

Since joining Odessa in 2018, Jaegers has helped the Wranglers to 70 wins and a pair of third-place finishes in the WJCAC. In 2019, she mentored a pair of NFCA All-Americans in Illy Cisneros and Becca Duran and five NFCA All-Region selections. Serving primarily as Odessa’s catchers and outfielders coach, Jaegers is the program’s recruiting coordinator and assists with hitting, offense and game-day defensive management. Additionally, she teaches classes and sets up a minimum of three community service events each year.

“Melanie is an outstanding young coach who goes above and beyond what I ask her to do on a daily basis,” said head coach Jeff Jackson. “She juggles numerous responsibilities and even helps our Athletics Director during volleyball and basketball games without complaint. She is going to be an extremely successful head coach someday soon and I’m lucky to have her help.”

Bridge, who has been on staff for eight years, was instrumental in Madison returning to the NJCAA Division II national tournament for the second year in a row, while totaling 94 victories over two seasons. He is responsible for the pitching staff, slappers and team defense, while also being heavily involved in recruiting. Under his guidance the pitching staff posted a 2.57 ERA and held the opposition to a .220 batting average in 2019. Two of Madison’s hurlers earned All-Region IV honors and were both named to the Region IV all-tournament team.

“Mike is responsible for a wide variety of duties and works tirelessly to improve our softball program,” said head coach Leo Kalinowski. “He has an insatiable passion for the game and is one of the main reasons the softball program has climbed the ladder over the years to become a nationally-ranked team. He is well-respected by players because of his vast knowledge of the game. He tirelessly worked at improving our players in all aspects of the game and his passion for the sport has created a winning environment.”

Kurucz has been a constant on the Herkimer staff the past four seasons. During his time, the Generals have collected three straight conference and regional titles, reached the NJCAA Division III National Championships three times and recorded two national runner-up finishes. He serves as the program’s defensive coordinator, first base coach and lead recruiter.

“Tony has coached every level of softball in his career from 10U to the college ranks,” said head coach PJ Anadio. “He truly loves the game and the kids. He is very active in the community, leading the way in many community outreach programs for the college and softball program. He is truly deserving of this award.”

Jones, entering his fourth season with SJCC, runs the Jaguars’ strength and conditioning program, works with the outfielders and focuses on the metal side of the game. A vital part of the 2019 NFCA Regional Coaching Staff of the Year, Jones helped the Jaguars post a 38-6 mark, earn a Coast Conference South Division championship, CCCAA Regional and Super Regional titles and an appearance in the State Championship Tournament. The student-athletes bought in and thrived in Jones’ strength and conditioning program as the Jaguars remained healthy throughout the year with no major injuries. He coached the 2019 Schutt Sports/NFCA Cal JC, Northern California and Coast Conference Player of the Year in Maddie Gallagher.

“Coach Jones has been one of the best assistant coaches in my 28 years at San Jose City College,” said head coach Debbie Huntze-Rooney. “His passion, commitment, guidance, respect of players, coaches, and umpires, and the knowledge of the game is what sets him apart from others. His personality and smile were contagious and often times helped the players relax and play the game of softball at their highest level.”

In 2019, Wagner stepped in and took over all the head-coaching duties when Columbia head coach Lauren Guthrie was bed-ridden, following a post-pregnancy surgery. Under her guidance the Roughnecks finished second in the district and reached the second round of the playoffs. According to Guthrie, Wagner and the rest of the Columbia coaching staff went over and beyond of what she could have asked for.

“Katy Wagner is an amazing assistant as well as a friend,” said Guthrie. “She took on the role of interim softball coach while I was out after losing one of my twins last year. I could not ask for a better coach in our program.”