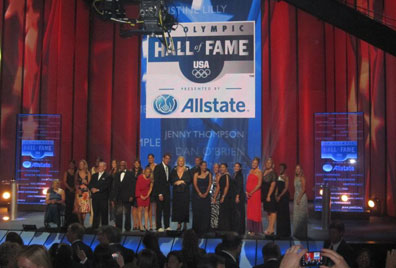 The broadcast of the 2012 U.S. Olympic Hall of Fame Induction Ceremony presented by Allstate, hosted by Jimmy Roberts and Alex Flanagan, will be broadcasted on NBC Sports Network on Thursday, Aug. 23 at 7 p.m. ET.

CLICK HERE FOR PHOTOS FROM THE INDUCTION CEREMONY AND EVENTS

“It was such a spectacular two days seeing all my old teammates and coaches,” said three-time Gold Medalist Lori Harrigan.  “What this team and staff did in Athens 2004 was incredible and something so magical in the Olympic movement and Olympic history.  We are so grateful for this honor and to be recognized among some of the World’s best for our accomplishments.”

“I am completely overwhelmed by this honor,” said three-time Olympic Gold Medalist Lisa Fernandez.  “Never did I ever think that playing the game of softball that I love so much would allow me to reach this level of accomplishment.  This is bigger than anything I have dreamed of.  What we have been able to accomplish as a sport is incredible.  There is no greater honor than being inducted into the U.S. Olympic Hall of Fame.”

Dubbed the “Real Dream Team” on the cover of Sports Illustrated magazine, the 2004 U.S. Olympic Team went 9-0 in Athens, a record that included eight consecutive shutouts and four run-rule wins. In total, the Americans outscored opponents 51-1, not allowing an opponent to score until 55 2/3 innings into the tournament when Australia scored in the sixth inning of the Gold Medal Game.

“First of all, what a great honor for the 2004 Olympic team and Lisa to be inducted into the Olympic Hall of Fame,” said 2004 and 2008 Olympic head coach Mike Candrea.  “This team set the standard for our sport as they performed flawlessly in Athens and dominated the world.  They put together a great performance by great athletes and truly committed to the process of being the very best ever.  I am so proud to have been a part of this great group of athletes, coaches, and the USA Softball family.”

Members of the 2004 U.S. Olympic Softball Team set 18 Olympic records in Athens. No U.S. Olympic Team has ever given a more dominant performance with as many team and individual Olympic records broken en route to the Gold Medal. Among the teams records set were the most hits (73), highest team batting average (.343) and highest slugging percentage (.559). Fernandez set the individual record for batting average with .545 while Crystal Bustos’ 10 RBI and five home runs were also records.

The U.S. pitching staff, led by Fernandez, had the lowest combined earned run average (.12) in Olympic history. One run is also the fewest allowed by a team in Olympic history. And dominant pitching was no fluke in Athens as the team also had a .22 ERA during the “Aiming for Athens” Olympic preparation tour, in which they went 53-0 in 30 cities.

While the team relished in on-the-field triumphs, the 2004 U.S. Olympic Softball Team battled off-the-field tragedy. The team wore “SC” on their helmets to honor Sue Candrea, coach Candrea’s wife, who passed away from a brain aneurysm 10 days before the team left for Greece. Sue was traveling with the team in central Wisconsin on the “Aiming for Athens” tour.

“It is an incredible honor for all of us to be inducted, together, into the U.S. Olympic Hall of Fame,” said three-time medal winner Stacey Nuveman.  “Our Gold-Medal performance in Athens was truly a team effort, which makes this team honor very fitting.  We had a special group and overcame very difficult circumstances to win in such a dominant fashion in 2004.  I could not be more proud of our team and our accomplishments.  Thanks to you the fans who voted for us, and I cannot wait until the induction ceremony in July!”

Fernandez is part of a rare class of U.S. Olympians who hold three Olympic Gold Medals from three Olympic Games. In 1996, 2000 and 2004, Fernandez led the Americans to the Gold Medal, the only pitcher to appear in three Olympic finales. Most notably, she entered the final game of the 1996 Olympic Games in the sixth inning and earned the save as Team USA defeated China 3-1 for the inaugural softball Olympic Gold Medal. Overall, she achieved a 7-2 record in the circle throughout her Olympic career, allowing only 20 hits, seven walks and six runs (four earned) while striking out 93 over 74.2 innings of Olympic play.

“When I heard I was a finalist for this opportunity, it meant so much to my family, especially my mom and dad,” added Fernandez.  “With my dad being born in Cuba and my mom born in Puerto Rico and for me beingsynonymous with representing the United States, this truly is the most amazing honor.  I literally yelled when I got the call and when I called my parents we were all very emotional.  Honestly, I am speechless and so thankful for my teammates, coaches, and so many who guided me during my career.  Especially to the USOC as the support they provided with strength training, nutrition, psychology, the training center in Chula Vista, the list goes on and on.  It really assisted our team to put on the amazing performance that we did.”

While Fernandez is most renowned for her work in the circle, she also recorded 76 at-bats over three Games. Fernandez hit .333 (23-for-76) overall in Atlanta, Sydney and Athens with three doubles, three home runs and 15 runs batted in (RBI) and 13 runs scored.

“Being an Olympic athlete, well there is no greater level,” added Fernandez.  “That every four-year cycle is something so precious as there literally is just one moment in time.  It is like an addiction that comes with it because it is the ultimate test of greatness and you have just a small window of opportunity to be your absolute best.  It is most special because you represent, literally your entire country.  When you go into that arena, you have millions of people cheering you on and that sense of pride is incredible.  I still remember those people who would say thank you….and to know you did something for them in your own element of sport is breathtaking.  And to think that the sport of softball provided me all these opportunities and experiences is never what I expected when I first picked up the ball as a child.”

A rare pitcher/hitter, Fernandez has the distinction of holding four individual Olympic records in addition to those she helped set as a team. In 2000, she struck out 25 Australian batters, a record. She holds the Olympic record for fewest runs allowed. In 2004, she achieved the highest batting average (.545) in Olympic play and hit three doubles, another record.   Fernandez currently resides in the Los Angeles area and is an assistant coach for the UCLA softball program.

-Courtesy of the ASA/USA Softball