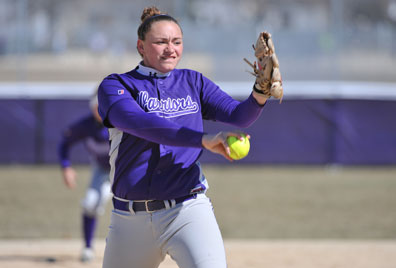 STARKVILLE, Miss. – Senior first baseman Breezy Collings of Flagler and senior Stacey Struzynski of Winona State have been named as the first Louisville Slugger Division II National Player and Pitcher of the Week of the 2012 season, respectively, for games played Feb. 13-19.

Collings led the Saints last week with a team-high .692 batting average, going 9-for-13 with 10 RBIs, three home runs and two doubles. For the week the Orange City, Fla. native posted a .643 on-base percentage and a 1.538 slugging percentage.

The 25th-ranked Saints have started the season at 11-2 and will stay in state this week for the Citrus Classic. While in Buena Vista, Flagler will play a pair of games with both in-state foe Saint Leo and No. 3 West Texas A&M.

Struzynski had a stellar week for Winona State going 3-0 in four appearances with a 0.36 ERA and 36 strikeouts. On Saturday, the senior from Homewood, Ill., threw the fourth no-hitter of her career in a 9-1 win over Adams State. Struzynski had two 10-plus strikeout performances on the week and ended the four-game span by holding the opposition to a .137 batting average.

This week the 23rd-ranked Warriors will look to improve on their 4-1 start when they host Wisconsin-Parkside, Minot State and Sioux Falls.

Other Top Performances
Jessica Coan of North Georgia went 2-1 over five games last week with 39 strikeouts and did not allow an earned run over the stretch… West Texas A&M’s Marci Womack held opponents to .127 batting average while helping the Lady Buffs to three wins … Kim Wacholder of Winona State hit a blazing .562 last week with 12 RBIs as the Warriors went 4-1… Angelo State’s Morgan Spearman had just three hits last week but made them count as she hit not one, but two game-winning grand slams and ended the week with eight RBIs.