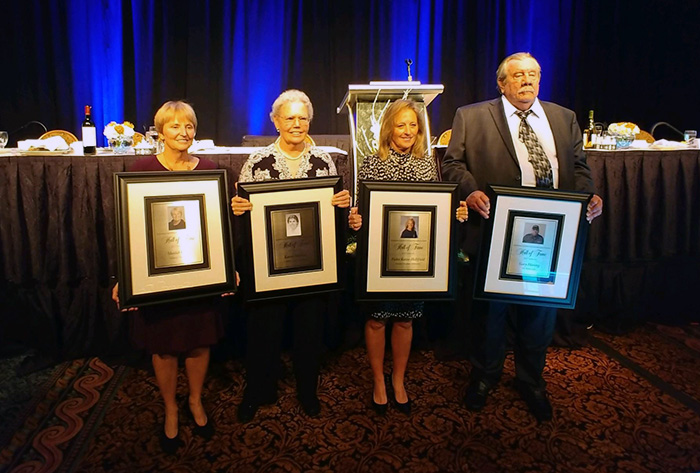 At the NFCA Convention's marquee event, the quartet of coaches enter as the association's 27th Hall of Fame Class. The induction of Gulas, Haning, Kazee-Hollifield and Mullins brings the Hall's membership to 77.

Gulas, who retired after the 2017 season, enjoyed a 31-year career as a collegiate head coach, the last 21 years as the Eagles’ skipper. Compiling 30 wins in her final season, she surpassed 900 career victories and won nearly 66 percent of her games with a 929-487-1 record. In her final 21 seasons guiding the Eagles, Gulas collected 723 wins. Additionally, she served as Ashland’s Assistant Athletic Director and Senior Woman Administrator during her final two years at Ashland.

She compiled a winning record in all 21 of her seasons at Ashland, leading the Eagles to 12 NCAA Division II tournaments and collecting five Great Lakes Intercollegiate Athletic Conference (GLIAC) titles and three conference Coach of the Year awards. In 1998, Gulas guided Ashland to a school-record 53 wins and a No. 3 national ranking. The Eagles collected 40 wins five times during her tenure.

Haning is our first Travel Ball member to be inducted into the Hall of Fame. He helped build the Batbusters into one of the most well-known and successful travel ball organizations in the nation, with more than 30 national championships. His team rosters have been a who’s who of the top names in softball.

Already a member of the Carson-Newman and SAC Halls of Fame, Vickee has been the Eagles’ only coach, collecting 1,135 career victories over her 32 seasons. Her wins rank sixth and 22nd among Division II and four-year college head coaches, respectively.  Kazee-Hollifield's .738 winning percentage ranks inside the top 10 of the Division II coaching annals.

Kazee-Hollifield, the winningest coach in Carson-Newman history, has taken the program she started and has yet to see them suffer a losing season. In 1986, she guided the first-year program to a 21-10 mark and has never looked back, winning over 38 games a year from 1988-92, and grabbing the first two conference titles.

In addition to her softball prowess, Kazee-Hollifield was a standout basketball player, leading the state of Tennessee in scoring her senior year of high school and later earning selection to the Carson-Newman “Team of the Century” in 1995. She still ranks among the school’s statistical leaders. Kazee-Hollifield is a former head volleyball coach at Carson-Newman, compiling a 59-21 record over three seasons, and an assistant for the basketball program, before concentrating solely on the softball program and serving as the school’s senior woman administrator.

Mullins, who retired in 2014, won 862 games over 31 seasons leading her alma mater UConn. On her watch, the Huskies went to eight NCAA tournaments, and advanced to the Women’s College World Series in 1993, when the Huskies won a school-record 45 games and finished a run of five straight NCAA appearances from 1989-93. UConn also qualified in 1995, 1996 and 2001.

During her tenure, UConn advanced four times to the NCAA regional championship game, winning the NCAA regional title in 1993 en route to its berth in the Women’s College World Series. In a five-year span from 1989-93, Mullin’s Huskies were one of only nine Division I softball programs to qualify for each of the five NCAA tournaments.

Mullins is a former player for both the Huskies’ softball and basketball teams, as well as a former nationally-recognized Major League Fastpitch Softball infielder and the co-founder of the Single-A Major Waterford (Conn.) Mariners softball team.