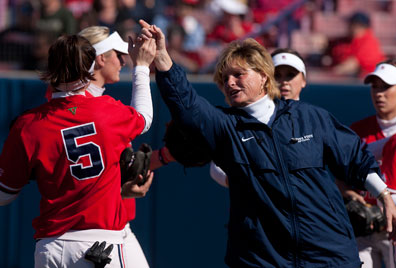 Wright, who is the NCAA Division I all-time winningest softball coach and is ranked second all-time in NCAA Division I history for victories regardless of sport, steps down after guiding the university to its first NCAA Division I team title (1998) and directing the softball program to unparalleled heights.

Under her direction the Bulldogs have appeared in every NCAA Tournament championship, while becoming the second all-time winningest softball program in Division I history.

An U.S. Olympic coach and 13-time hall of famer, Wright has amassed 1,454 career wins in 33 years while leading the ’Dogs to 1,291 victories in 27 seasons.  With 10 NCAA Women’s College World Series appearances under her tutelage, she also has led the program to three national runner-up finishes, three third place showings and three fifth-place performances in the WCWS.  In addition, the 10-time conference coach of the year has led the softball program to 17 outright or shared conference titles.

While Fresno State is one of just five programs in Division I history to make 10 or more trips to the WCWS, she has coached 16 CoSIDA Academic All-Americans – a mark that ranks her No. 1 overall among active coaches while the softball program ranks third overall among Division I schools with 18 honorees.  Wright also has overseen 138 all-conference picks, 89 NCAA All-Region, 53 All-Americans, 16 NCAA individual statistical champions, four NCAA Postgraduate Scholarship Award winners, two NCAA Top VIII Awardees, 15 Olympians, eight professionals and two No. 1 professional draft picks while averaging 48 wins a season.

In 2012 Wright coached her 1,700th game at Fresno State against then No. 7 UCLA and the Bulldogs notched a 6-3 road victory.  She picked up her 1,450th career win at home against New Mexico State on April 20 and is on schedule coach her 2,000th career game at this week’s WAC Tournament.

This National Coach of the Year has seen her squad ranked in the national polls for 27 consecutive years while the fan base led the NCAA in average attendance 13 times and total attendance 10 times.    She also was a driving force behind the construction of the “New” Bulldog Diamond – the first true major league style ballpark for collegiate softball which proved to be a blueprint for softball growth on the NCAA Division I level.

“There is never a good time to do this [retire],” said Wright, who will lead the ’Dogs into the Western Athletic Conference Championship this week.  “I love my team and we are going to give the rest of our season everything we have, but it is time.

“I would like to thank Fresno and the Central Valley for accepting me as one of their own for so many years.  I want to thank all Bulldog fans and the Diamond Club for their tireless support.  I especially want to thank all of my former players for such a wonderful career.  The players and fans have kept me going for 27 years and I hope those years were as positive for them as they have been for me.  It has been a great ride.”

Off the field Wright has been just as passionate by being an advocate for the Central California Blood Bank and the Marjaree Mason Center as well as a highly sought after clinician and motivational speaker.

“Margie is the all-time NCAA Division I winningest softball coach in the country and she has demonstrated truly extraordinary dedication to her sport,” Fresno State Director of Athletics Thomas Boeh said.  “She has led our softball program with the utmost integrity, fairness and grace.  Her commitment to the student-athletes and to Fresno State has been tireless and we are very fortunate to have had an individual who championed the mission of what being a student-athlete means, both on and off the field.

“She set a standard at Fresno State that other coaches around the country have spent years attempting to duplicate,” Boeh continued.  “One can review all the stats and accomplishments, but what stands out most is the fact that she was always passionate and the quintessential competitor.  Margie is a pioneer and legend in the sport of softball, and more importantly she demonstrated that given the proper commitment, anyone can play a sport and succeed.  She will be missed and we wish her the very best in all of her future endeavors.”

A pioneer and legend among Division I softball coaches, Fresno State Athletics will celebrate Wright’s accomplishments and iconic career on June 10 at 1:00 p.m., in Bulldog Diamond.

Coach Wright will address the media at 3:30 p.m. following Monday’s scheduled practice at Bulldog Diamond. This will be the only press availability with Coach Wright until the conclusion of the WAC Softball Tournament. Fresno State Director of Athletics Thomas Boeh will also be available at that time.