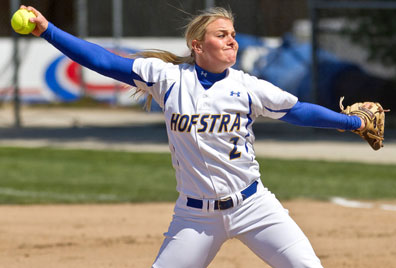 STARKVILLE, Miss. – Junior pitcher Olivia Galati of Hofstra has been named as the Louisville Slugger Division I National Player of the Week for games played April 2-8.

Galati took care of business at both sides of the plate last week hitting .429, while tallying a 0.58 ERA in the circle. Over six games, Galati recorded four RBIs, three runs, three doubles and a triple with a .520 on-base percentage and a .667 slugging percentage. As a pitcher, she was equally as impressive, striking out 45 while allowing just 12 hits, two earned runs and one walk. For the week, the junior notched two complete game shutouts and limited her opponents a .141 batting average.

After giving up two earned runs against Rutgers to begin the week, the West Babylon, N.Y., native ended her four-game stretch by allowing just three hits and no runs over her final 17.1 innings. In her final game of the week against Delaware, Galati tossed a five-inning, two-hit shutout in the circle, while going 4-for-4 at the plate with a double, a triple, three runs and four RBIs.

The Pride is currently 18-10 overall, a perfect 8-0 in the CAA and is in the midst of a 14-game win-streak that dates back to March 18. This week, Hofstra will host Central Connecticut State and Lehigh in mid-week doubleheaders before continuing league play this weekend at home with George Mason.

Other Top Performances
Wisconsin’s Stephanie Peace helped power the Badgers to a 6-0 week by going 10-for-17 at the plate with four doubles, a triple and two home runs … Sara Nevins of USF went 3-0, struck out 28 batters over 15.1 innings and limited her to opponents to a .100 batting average over three games last week… Oregon’s Sam Pappas went 5-for-9 in the Duck’s Pac-12 series win over then 14th-ranked Stanford with five runs, five RBIs and two home runs… Brittany Gardner of Loyola Chicago helped pilot the Ramblers to each of their four wins last week, fanning 29 and tossing two complete game shutouts in the process… Albany’s Charlise Castro tagged opposing pitcher for extra bases in 10 of her 15 hits last week with four doubles, two triples and four home runs, while driving in 13 runs and scoring 12 of her own.