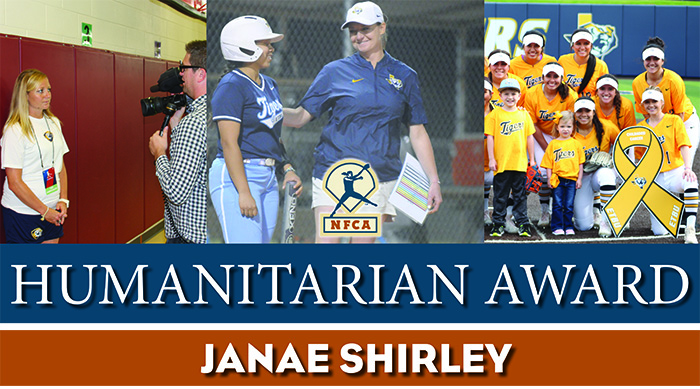 LOUISVILLE, Ky. — The National Fastpitch Coaches Association is pleased to announce Janae Shirley, the longtime head coach at East Texas Baptist University, as the 2022 recipient of the Association’s Humanitarian Award.

Shirley, who has been active in the community since her playing days at ETBU, continued her service as an assistant coach and since becoming the program’s head coach in 2008. Her reach isn’t limited to simply the softball squad, as she has set an example for the entire ETBU athletics program with her servant-leadership.

“I could not think of a more deserving coach than Janae Shirley for the NFCA Humanitarian Award,” ETBU Vice President for Student Engagement and Athletics Ryan Erwin said. “Coach Shirley has used her role as head coach at ETBU for the past 15 years to serve and enhance the local Marshall community. The number of initiatives and projects that her and her program have started and been involved in over the years is truly remarkable. Her servant heart and desire (for) community engagement has been contagious to not only her student-athletes, but to other ETBU athletics teams and student-athletes. We are proud of what Coach Shirley has accomplished on the field for ETBU Softball during her tenure, but even more impressive is her continued investment in others outside her program in the community.”

Shirley and her team have hosted both an annual Strike Out Cancer weekend and Military Appreciation Day since 2010. The Strike Out Cancer event recognizes and honors families who have battled cancer with a Childhood Cancer game on Friday and a Strike Out Cancer game on Saturday. Over the past 10 years, the ETBU Cancer Fund has raised nearly $50,000 through silent auctions, t-shirt sales and donations. Meanwhile, the Military Appreciation Day salutes all branches of the military. The Tigers wear special uniforms for both events.

Each year on senior day, Shirley recognizes not only her own graduating players, but also provides floral arrangements for the opposing team’s seniors.

“She has a caring heart and goes above and beyond for her players, former players, and the people she knows,” NFCA Hall of Famer and ETBU associate head coach Bill Galloway said in support of her nomination. “She is the first person I call when I have something come up. She has a compassion like no one I have seen.”

During the height of the COVID-19 pandemic in 2020-21, Shirley initiated a pen pal program between her team and children undergoing cancer treatments, who, due to safety restrictions, couldn’t have visitors. That 250-plus-hour project earned recognition from the National Association of Division III Athletic Administrators as runner-up in the “An Array of Projects” category of that organization’s community service awards program.

"Our program was incredibly fortunate to be able to find a way to connect with others during the pandemic," Shirley said when that honor was announced. "Being able to bring joy to sick and hurting children and connect through letters and communications was such a blessing for our program and taught our players how something as small as a letter could bring so much joy."

Other community-service activities her team has undertaken during her tenure include Thanksgiving basket prep, water delivery and a canned food drive for Mission Arlington; the East Texas Buddy Walk to promote awareness, acceptance and inclusion of individuals with Down syndrome; packing gifts for children in need through Operation Christmas Child; cleaning elementary schools and picking up trash alongside the road during various service days; hosting kids camps; serving meals to those in need at Central Baptist Church’s Hearts for Hungry event; volunteering with Habitat for Humanity and the Salvation Army, and at the Trinity Episcopal Fall Festival Wonderland of Lights in downtown Marshall and the 9/11 Heroes Run.

She has been a mentor to countless student-athletes both in her role as coach and as ETBU’s senior woman administrator. Two of her softball players — Lya Swaner (2013) and Jayme Perez (2017) — were top nine finalists for the prestigious NCAA Woman of the Year, the only American Southwest Conference program to have had more than one honoree.

“As a steward of ETBU Softball, Coach Shirley has been intentional in calling her student-athletes to utilize their sports platform to better the community of ETBU, Marshall, and East Texas,” ETBU President Dr. J. Blair Blackburn said. “Coach Shirley’s investment in community health engagement initiatives will have a lasting impact throughout our region due to her caring spirit and conscientious leadership.”

Shirley and her team will open their arms to the Division III community twice this coming season, as Taylor Field will host the inaugural Jan Gentry Classic in March and then the 2023 NCAA Championship to close the season. Gentry was the longtime NCAA Associate Director for Championships and Alliances who died in a car accident in 2021.

The NFCA’s Humanitarian Award recognizes a member coach who has selflessly dedicated time toward the long-term betterment of the community and/or engaged in charitable activities in the service of others. Shirley will be honored in front of her peers during the NFCA Awards Brunch on Dec. 10 during the 2022 NFCA Convention at the JW Marriott San Antonio Hill Country Resort and Spa.