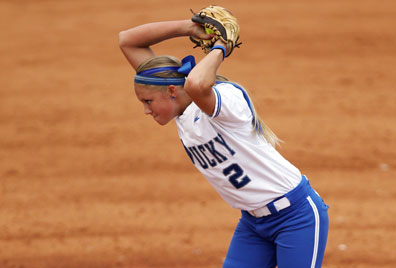 STARKVILLE, Miss. – Senior pitcher Chanda Bell of Kentucky has been named as the Louisville Slugger Division I National Player of the Week for games played April 30 - May 6.

Bell was 2-0 with a save last week as the Wildcats picked up a critical three-game sweep of then 22nd-ranked LSU. Over 15.2 innings, Bell allowed just three earned runs off of four hits with 16 strikeouts and only five walks. She finished the week with a 1.34 ERA and .085 opponent’s batting average.

The Indianapolis, Ind., native began the week by striking out 10 in an extra-inning affair than ended in a 4-3 eight-inning win for Kentucky. On Saturday, Bell came in and retired the final two batters of the game in the top of the seventh to preserve the 2-1 victory and earn her third save of the season. In the finale on Sunday, Bell tossed the fifth no-hitter of her career to clinch the first series sweep of LSU in program history. The sweep also gave Kentucky the fifth-seed in this weekend’s SEC tournament and gave them enough wins to become NCAA tournament eligible

At the end of her final regular season, Bell is currently 16-0 on the year with three saves, a 2.49 ERA, 194 strikeouts and an opponent’s batting average of .201. She also currently ranks 33rd in the nation in strikeouts per seven innings with 8.3.

Kentucky is currently 29-27 and finished its SEC slate at 15-13. The Wildcats will now travel to Tuscaloosa, Ala., for the SEC Tournament where they will take on fourth-seeded Georgia at 4 p.m. CT on Thursday.

Other Top Performances
Stanford’s Teagan Gerhart helped her team to a 4-0 week, including a sweep over then No. 14 Washington, by allowing just one earned run over three wins and a save… Adrienne Monka of Northwestern hit .700 last week in a sweep of Michigan State, including two home runs and eight RBIs… Massachusetts’ Sara Plourde pushed her win-streak to 18 by notching for victories last week, while striking out 53… Hawai‘i’s Kelly Majam helped lead the Rainbow Wahine to a sweep of Utah State and the WAC regular-season crown by batting .800 with three doubles, a round-tripper and four RBIs…Syracuse’s Jenna Caira picked-up two wins, including a no-hitter, against then 16th-ranked USF, and allowed just two hits over 15 innings.